OECD/NEA Nuclear Energy in the Circular Carbon Economy: A Report and Recommendations to the G20 and COP26

This report by OECD?NEA highlights the potential role of nuclear in contributing to the circular carbon economy as a low-carbon source of electricity, but also as a source of heat and system integration services.

It further highlights the essential role played by the existing nuclear reactor fleet in supporting the resilience of the electricity system through the COVID-19 crisis, and the significant role that the nuclear sector can play in post-COVID-19 recovery efforts.
Full Text (52 page PDF file)  ➡️ https://lnkd.in/e8JSXdiF

As with all low-carbon technologies, a number of enabling policies are needed for nuclear power to play its full role in the circular carbon economy. They are outlined in the last section of this report. Building on these conclusions, G20 countries could take specific action in a number of areas, both individually and collectively.

The circular carbon economy (CCE) approach applies the circular economy model and its “3Rs” framework of Reduce, Reuse, and Recycle to mitigating carbon emissions. The concept of the CCE also incorporates a fourth element, Remove.

The OECD/NEA report on Nuclear in the carbon circular economy highlights the potential role of nuclear in contributing to the circular carbon economy not only as a low-carbon source of electricity, but also as a source of heat and system integration services. Nuclear energy offers unique opportunities to deliver valuable non-electric applications, ranging from district and industrial heat applications, desalination, and large-scale hydrogen production. 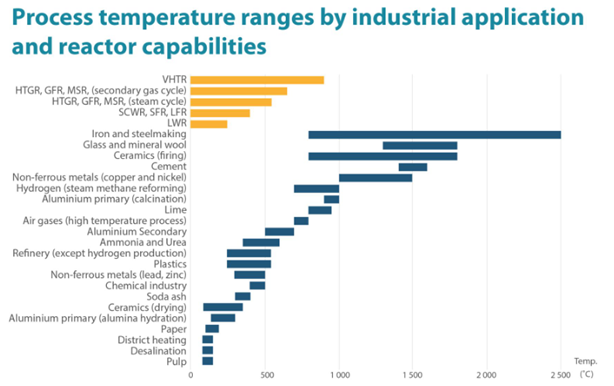 These applications also offer competitive value propositions: for instance, coupling nuclear power plants with hydrogen electrolyzers allows to operate them with a high load factor, which is critical for the cost-competitiveness of low-carbon hydrogen. Nuclear energy could also play a significant role in decarbonizing hard-to-abate sectors, such as high temperature industrial heat applications.

•  Include nuclear in post-COVID-19 economic recovery plans. Governments should take advantage of the post-COVID-19 economic recovery to accelerate the energy transition towards meeting climate objectives. Countries should invest in the creation of a modern, resilient infrastructure that promotes stable high value jobs for equitable and sustainable economic development. Nuclear power is one of the low-carbon energy sources best prepared to help many countries achieve these goals.

•  Capitalize on lessons learned from recent Gen-III construction projects. With the construction of several FOAK Gen-III nuclear reactors completed, the nuclear industry and its supply chain have in large part redeveloped their capabilities in several OECD countries. By building on these reactor designs, governments have a window of opportunity to realize cost reductions in the early 2020s through timely new-build decisions. Delaying these decisions will prevent the sustainment of capabilities and therefore raise near-term project construction costs. 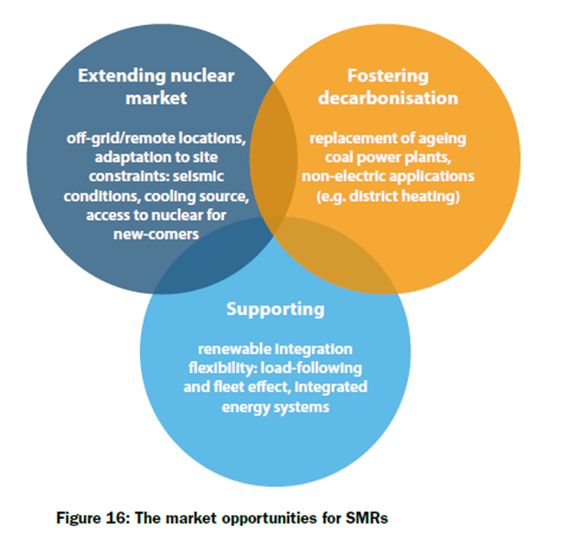 • Include nuclear energy in sustainable finance initiatives. Nuclear energy should be included in future sustainable finance schemes considering its low-carbon content, benign lifecycle environmental footprint, and the feasibility of long-term solutions for the management of nuclear materials and wastes. In particular, a recent NEA report highlights the international scientific consensus on the safety and effectiveness of deep geological repositories (DGRs) (NEA, 2020a).

• Support nuclear cogeneration demonstration plans. There is significant focus in the decarbonizing all energy sectors, particularly those that cannot be easily electrified. Since nuclear energy is one of the few low-carbon energy sources capable of producing heat at the same time as electricity, optimizing the use of this heat, particularly for hard-to- abate energy sectors, can significantly foster the contribution of nuclear energy to the circular carbon economy.

The Role for Nuclear Energy in Decarbonization Scenarios

In line with the decarbonization objectives of the Paris Agreement, nuclear power is expected to play a growing role over the coming decades. According to the International Energy Agency (IEA) Sustainable Development Scenario (SDS), installed nuclear capacity needs to increase by about 35% between 2020 and 2040 in order to meet Paris goals.

Scenarios from the latest Intergovernmental Panel on Climate Change (IPCC) report also offers a broad range of trajectories to meet the 1.5°C target by 2100. Most of these scenarios foresee an important role for nuclear power with a median increase of the world nuclear reactor fleet by about 115% by 2050. 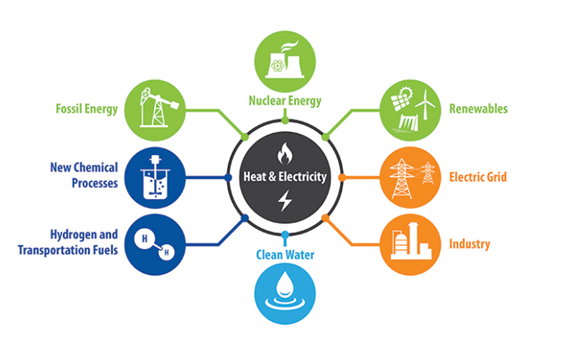 Meeting this expected growth will require mobilizing both the existing nuclear reactor fleet through long-term operation, and deploying new nuclear reactors. In that respect, the nuclear sector has a comprehensive technological offer to meet different market needs.

This includes Small Modular Reactors (SMRs) that can be especially well suited in terms of capacity range for the replacement of ageing coal power plants, large Gen-III reactors to meet electricity demand growth in emerging countries and the fleet renewal needs expected in more advanced economies, and Gen-IV reactors with a range of applications thanks to alternative coolants and higher thermal power.

However, to meet the target of the SDS scenario, at least doubling the annual installed new nuclear capacity is needed compared to current trends. This increase would be even more significant when looking at IPCC scenarios. The scenarios are incomplete without full consideration of the role of nuclear power.

Dan Yurman ~ For breaking nuclear news follow me on Twitter @djysrv or https://www.twitter.com/djysrv ~ About this blog and disclaimers for NeutronBytes ~ ~ https://neutronbytes.com/2014/08/31/welcome-post/ Contact Me ~ neutronbytes [at] gmail [dot] com ~ Text via Signal 216-218-3823 ~ I am NOT active on Facebook, Reddit or Instagram. Attempt no landings there. ** Header Image Credit: http://apod.nasa.gov/apod/ap110904.html ~ ** Emails sent by readers about blog posts are considered to be comments for publication unless otherwise noted. ** The content of this blog is protected by copyright laws of the U.S. "Fair use" provisions apply. The RSS feed is for personal use only unless otherwise explicitly granted.
View all posts by djysrv →
This entry was posted in Nuclear. Bookmark the permalink.
%d bloggers like this: