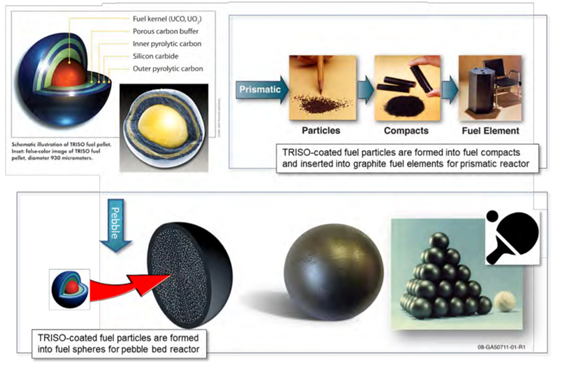 Funded through the Canadian Nuclear Research Initiative (CNRI), the project represents the first time that a Tristructural-Isotropic (TRISO) based fuel has been manufactured in Canada.

USNC’s innovative FCMTM pellet design consists of spherical TRISO particles dispersed in a matrix of silicon carbide. The TRISO particles have a layered structure with a dense fuel kernel, which are then coated with layers of graphite and silicon carbide making the particles incredibly robust and able to withstand intense heat and pressure.

For these reasons, TRISO fuels are proposed for a number of new small and advanced reactor designs currently under consideration in Canada. Of the 13 advanced reactors currently participating in CNSC’s Vendor Design Review, a per-licensing process, 8 plan to use TRISO or HALEU fuel.

According to the Canadian Nuclear Safety Commission, there are eight licensed facilities in the country that are involved in the nuclear fuel cycle.

This blog asked Rumina Velshi, President and CEO of the Canadian Nuclear Safety, during an online webinar last week, if CNSC had received any inquiries about a new nuclear fuel facility or an upgrade to an existing plant, to manufacture TRISCO fuel in commercial quantitates.

Her response was that so far the agency has not received an inquiries nor have there been any pre-licensing talks with any of the current licensed facilities.

She added, “I would not be surprised to get one. We will be ready for an application if and when we get one.”

About CNRI and its Partners

Launched in 2019, the CNRI program was established by CNL to accelerate the deployment of SMRs in Canada by enabling research and development, and connecting the SMR industry with the facilities and expertise within Canada’s national nuclear laboratory.

The FCMTM project is part of a broader portfolio of work between CNL and USNC that includes the establishment of a functional laboratory for fuel analysis at CNL’s Chalk River campus. The work also includes the development of a multi-year testing program to support the validation of USNC’s fuel and core as they progress through the Canadian Nuclear Safety Commission’s Vendor Design Review process.

USNC, along with Ontario Power Generation, is a key partner in Global First Power, the organization proposing to construct and operate a small modular reactor at Atomic Energy of Canada Limited’s Chalk River Laboratories campus in Ontario. The MMR project has begun licensing activities with the Canadian Nuclear Safety Commission, and an Environmental Assessment is currently underway.

(NucNet) Small modular nuclear reactors have the potential to be an economically competitive source of energy in Canada, but whether or not they are deployed will depend on factors including the availability of other low-carbon alternatives, natural gas prices and carbon pricing. These are the key findings of a feasibility study released by four Canadian power companies.

The study says energy generated by SMRs is expected to be economical compared to other low-carbon alternatives and could be used to support reduction in carbon emissions and meet new energy demands. The choice of SMR technology and speed of commercialization will play a significant role in the cost of deployment.

The study concludes that for off-grid applications, such as remote mines or communities, SMRs need to be economically competitive with diesel generation – including the cost of the fuel and transport.

SMRs could potentially reduce energy costs for remote sites and communities with electricity demand between 10 and 20 MWe. For smaller communities – those with demand of 3 MWe – the costs are near break-even.

As with on-grid applications, the choice of technology and speed of commercialization will play a key role in the cost of SMR deployment and its ability to compete with diesel.

In December 2019, the provinces of Ontario, New Brunswick and Saskatchewan signed a memorandum of understanding that established a framework for deployment of SMRs in each province. This feasibility study, prepared by Ontario Power Generation (OPG), Bruce Power, NB Power and SaskPower for the governments of Ontario, New Brunswick and Saskatchewan, represents one of the early deliverables from the MOU.

The study says the three provinces share a collective interest in SMRs as a clean energy option to address climate change and meet regional energy demands, while responding to the need for economic growth and innovation.

The provinces have agreed to engage with the federal government on issues related to SMR deployment, including technological readiness, regulatory frameworks, economics and financing, nuclear waste management and public and Indigenous engagement.

SMRs, of 300 MWe or less, are much smaller than traditional nuclear power plants. They are cheaper to mass produce and easier to deploy. Their modular design allows for deployment in large established grids, small grids, remote off-grid communities and as an energy source for resource projects.

The four power companies have been working over the last two years to develop three “streams” of SMR project proposals. SMR projects being proposed to the governments of Ontario, New Brunswick and Saskatchewan are based on the three streams.

Stream 1 proposes a first grid-scale SMR project of about 300 MWe constructed at the Darlington site by 2028, followed by up to four subsequent units in Saskatchewan, with the first unit in Saskatchewan being in service in 2032.

This “fleet” approach would identify a common SMR technology to be more quickly and efficiently deployed in different areas. OPG, Bruce Power and SaskPower are collaborating to select the technology and developer by the end of 2021.

Stream 2 involves two SMR designs that will be developed in New Brunswick through the construction of demonstration units at the Point Lepreau nuclear site. With funding of CAD30m (€20m) from the provincial government, two developers – Moltex Energy and ARC Clean Energy Canada Inc – have opened offices in New Brunswick.

Stream 3 proposes a new class of micro SMR designed primarily to replace diesel use in remote communities and mines. To advance this technology, a 5-MW gas-cooled reactor project by Ultra Safe Nuclear Corporation (USNC) is underway at the Chalk River site in Ontario and is expected to be in service by 2026.

Alberta’s Jason Kenney became the fourth premier to sign an agreement supporting the development of small modular nuclear reactors (SMRs) in Canada last week. Kenney signed a memorandum of understanding with the premiers of Ontario, New Brunswick and Saskatchewan.

Kenney said signing on to the memorandum of understanding would help diversify Alberta’s energy sector and keep the province at the forefront of any future advancements in the technology.

Alberta says small modular reactors could supply non-emitting, low-cost energy for remote areas in the province as well as industries that need steam such as the oilsands.

(WNN) There is bipartisan support in the US for the country to be the world’s leading supplier of fuel for advanced reactors, Maria Korsnick, president and CEO of the Nuclear Energy Institute (NEI), said last week during the World Nuclear Fuel Cycle forum, which the NEI co-hosted with World Nuclear Association.

Korsnick said, “Ambitious climate commitments really demand a reimagined energy system with our largest, most reliable carbon-free source at its center,” she said.

“The President recently announced its $2 trillion American Jobs Plan and this legislation would establish a national clean energy standard that includes nuclear; recognizing its carbon-free production alongside sources like wind and solar. The plan would also include significant funding for the development of advanced nuclear technology.”

Jennifer Granholm, the new secretary of energy, has “spoken about her commitments to all emission-free technologies, including nuclear”, Korsnick said.

She added that John Kerry, the special presidential envoy for climate, “has stated his strong support for US nuclear exports.”

US Commitment to Supply HALEU Ahead of the Market

“The US government has recognized the timing challenge for commercial entities to build out HALEU capacity without yet a clear market signal and so it’s taking concrete steps for the US to lead in this area,” she said.

Last year Congress passed legislation that instructed the US Department of Energy (DOE) to establish a HALEU program, and by this time next year, Centrus will be producing HALEU in their pilot facility, she said.

According to NEI, these actions, along with Congress passing support for the US uranium reserve, are “really reinvigorating” the entire US fuel supply chain and could allow the country to be a leading global supplier of advanced fuels.

Centrus Energy is working under a $115 million cost-shared contract with the DOE to deploy 16 of its AC-100M centrifuges at its Piketon, Ohio, facility to demonstrate HALEU production.

The Reuters wire service reports that China has approved the construction of five nuclear power units, with total installed capacity of 4.9 GW, roughly 10% of the country’s total.

All four will use Russian-made VVER-1200 technology and each unit has a generating capacity of 1.2 gigawatts (GW).

Construction of three of the five units, the SMR and one each from Tianwan and Xudapu, is expected to start later this year and is scheduled for completion in 2026.

The governments of Zimbabwe and Russia this week signed an agreement that will see the Russians assisting the southern African nation setting up a nuclear power station to provide alternative sources of energy to the country facing years of perennial power cuts.

“The MoU seeks to facilitate higher level co-operation between the two countries in the use of nuclear energy, by laying a foundation for the execution of the agreed areas of co-operation.

In 2019, Zimbabwe joined the global Atomic Energy Agency (IAEA) an initial stage in uranium enrichment. The country has uranium deposits in the coal rich Hwange and Binga districts. Prospecting and validation of the ability to recover uranium in economic quantities is ongoing.

In the past the country has been identified as a supplier of uranium to Iran. In the current era it may be positioning its uranium resources as financial leverage for obtaining commercial nuclear power plants.

DARPA has awarded contracts for the first phase of the Demonstration Rocket for Agile Cislunar Operations (DRACO) program. The goal of the DRACO program is to demonstrate a nuclear thermal propulsion (NTP) system above low Earth orbit in 2025. The three prime contractors are General Atomics, Blue Origin, and Lockheed Martin.

“The performer teams have demonstrated capabilities to develop and deploy advanced reactor, propulsion, and spacecraft systems,” said Maj Nathan Greiner, USAF, program manager for DRACO. “The NTP technology we seek to develop and demonstrate under the DRACO program aims to be foundational to future operations in space.”

Phase 1 of the program will last 18 months and consist of two tracks.

Rapid maneuver is a core tenet of modern Department of Defense (DoD) operations on land, at sea, and in the air. However, rapid maneuver in the space domain has traditionally been challenging because current electric and chemical space propulsion systems have drawbacks in thrust-to-weight and propellent efficiency, respectively.

DRACO’s NTP system has the potential to achieve high thrust-to-weight ratios similar to in-space chemical propulsion and approach the high propellent efficiency of electric systems. This combination would give a DRACO spacecraft greater agility to implement DoD’s core tenet of rapid maneuver in cislunar space (between the Earth and moon).

“This first phase of the DRACO program is a risk reduction effort that will enable us to sprint toward an on-orbit demonstration in later phases,” added Greiner.

DRACO’s Phase 1 is expected to inform follow-on phases for detailed design, fabrication, and on-orbit demonstration. Any follow-on phases will be solicited by DARPA in a future announcement.