A revenue model that holds promise for developers of small modular reactors (SMRs) based on Gen IV designs is to offer heat as the primary output of their plants. Heat can be used to generate electricity, but it can also be used for process heat for industry, especially for manufacturing steel, cement, chemicals, the production of hydrogen, and seawater desalinization.

The combination of revenues from these heat streams is expected to expand the business case for advanced reactors in the SMR power range, e.g, >300MW(e). Grid services in the form of load following to support solar and wind energy projects could also be available. In some cases, designs propose to store heat on the form of molten salt.

Revenues from these heat streams could expand the business case for advanced SMR reactors as a result. Investors would then be able to look beyond the levelized cost of electricity (LCOE) when evaluating the business prospects for a new reactor design.

With a growing realization that nuclear energy is necessary to achieve decarbonization in the electric generation utility industry, and, in major process heat applications, the 2020s decade looks like one where action, based on this concept, could see more significant developments for nuclear energy worldwide and especially in Canada which has 13 SMR designs before the CNSC.

Canada’s Roadmap for SMRs is mostly driven by economic development considerations. Regulation is handled separately by the Canadian Nuclear Safety Commission. The emphasis on process heat as a new revenue source for utilities emerging as a major trend in the design of advanced reactors and particularly in Canada.

Next Generation After CANDU

Canadian firms like Terrestrial Energy and others, which are currently in Phase II of the Vendor Design Review at the Canadian Nuclear Safety Commission, have promoted process heat as a new primary source of output, and revenue, for SMRs.

Currently, all power-generating nuclear reactors in Canada are CANDU type PHWRs. (Coolant 300 C). Advanced SMRs will bring to Canada international designs, e.g., HTGRs, and new fuels, e.g., TRISO, HALEU, which have new risks and opportunities for the Canadian nuclear sector due to their high operating heat inside the reactor and for the secondary loop. (coolant can be molten salt, gas, or steam up to 600 C).

The advanced designs of SMRs being developed in Canada, for domestic customers and export to global markets, have two types of applications based on the outlet temperature of either the reactor or the turbine.

The low temperature (>300C) application that is most commonly cited by SMR developers is district heating involves steam >200 C from the reactor, or the waste heat from the turbine, delivered to industrial and residential users.
Key issues for success include;

All but two of the 13 SMRs in the CNSC Vendor Design Review (VDR) process, as of October 2020, are advanced designs that will generate high heat. Applications for process heat begin at about 500 C. These temperatures require co-location of the SMR and the industrial user(s) to avoid heat loss.

Hydrogen is a key fuel for a decarbonized future, e.g., fuel cells, hybrid vehicles, and industrial uses. Current method of producing hydrogen by steam methane reforming uses fossil fuels with large releases of CO2. Electrolysis of water can achieved by generated electricity from both commercial light water and advanced reactors. Other applications of process heat from SMRs include production of hydrogen to make ammonia, synthetic fuels, and lubricants.

High heat from advanced SMRs, e.g., > 600 C outlet temperature, uses 35% less electricity, but it creates challenges for materials in components to get the heat through a secondary loop, e.g., molten salt, gas, or steam.

Current use of natural gas to produce electric power for water desalinization is energy intensive and releases CO2. Using electricity can require up to 25KWh per cubic meter of water produced (264 gallons).  Using nuclear energy for this purpose removes the CO2 from the equation.

Assuming the average household in a town of 1,000 people uses 100 gallons per day per person, the requirement is for 100,000 gallons per day. The numbers add up faster for large urban areas with large non-residential users. The need for desalinization is likely to increase due to climate change.

The most efficient method is reverse osmosis now used by United Arab Emirates powered by a 1400 MW(e) reactor on coast of Persian Gulf. One unit is on the grid, and three others will come online in the next two years. 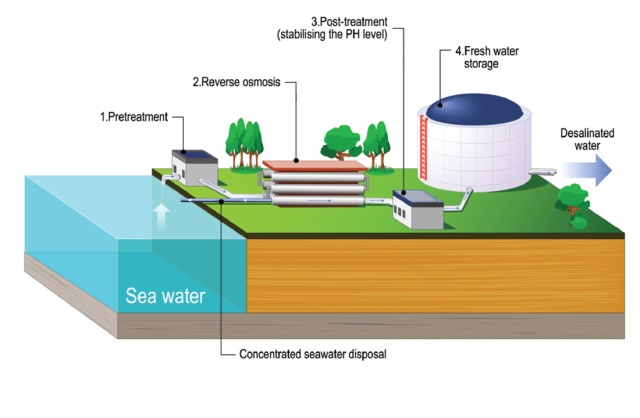 Key distinctions for all desalinization methods;

A key issue is the need for a governance / control agreement between the industrial user(s) and the utility operating the reactor that supplies the process heat and acceptance of it by regulatory agencies.  For instance, co-locating a advanced SMR with a petrochemical plant would require safety reviews of the cross facility risks of each on the other.

For industrial customers seeking to swap out fossil fuel to make steam for a nuclear reactor, the key concerns include;

A short list of issues that regulatory agencies will have for the safety of SMRs co-located with customer industrial sites include;

This is the first such investment from the Strategic Innovation Fund (SIF) announcing support for a Small Modular Reactor (SMR), and is directed to a developer of innovative Generation IV nuclear technology.

The company’s IMSR power plant when deployed is expected to provide high-efficiency on-grid electricity generation, and its high-temperature operation has many other industry uses, such as zero-carbon hydrogen production.

“The Government of Canada supports the use of this innovative technology to help deliver cleaner energy sources and build on Canada’s global leadership in SMRs,” said Minister Bains.

“By helping to bring these small reactors to market, we are supporting significant environmental and economic benefits, including generating energy with reduced emissions, highly skilled-job creation and Canadian intellectual property development.”

“SMRs are a game-changing technology with the potential to play a critical role in fighting climate change, and rebuilding our post COVID-19 economy,” said Hon. Seamus O’Regan, Minister of Natural Resources.

Terrestrial Energy welcomed the announcement, which will assist with its completion of a key pre-licensing milestone with the Canadian Nuclear Safety Commission.

“The Government of Canada is progressing with clear purpose to national deployment of SMRs, and it recognizes the great industrial and environmental rewards from nuclear innovation today,” said Simon Irish, Chief Executive Officer, Terrestrial Energy.

In accepting the investment, the company has committed to creating and maintaining 186 jobs and creating 52 CO-OP positions nationally. In addition, Terrestrial Energy is spending at least another $91.5 million in research and development.

As it proceeds toward commercial deployment of IMSR power plants before the end of this decade, Terrestrial Energy will draw on Canada’s world-class nuclear supply chain, potentially creating more than a thousand jobs nationally. It will also undertake gender equity and diversity initiatives, including increasing female representation in STEM fields.

The announcement comes just one week after Ontario Power Generation announced it will advance work with Terrestrial Energy and two other grid-scale SMR developers as part of the utility’s goal to deploy SMR technology.

Also, Terrestrial Energy USA and Centrus Energy recently announced that they had signed a memorandum of understanding to evaluate the logistical, regulatory, and transportation requirements to establish a fuel supply for Integral Molten Salt Reactor power plants, which would use standard-assay low-enriched uranium at an enrichment level less than 5 percent.

A new agreement hopes to speed along a nuclear reactor technology that could be used to fuel deep-space exploration and possibly power human habitats on the Moon or Mars. Los Alamos National Laboratory has signed an agreement to license the Kilopower space reactor technology (fact sheet) to Space Nuclear Power Corporation (SpaceNukes), also based in Los Alamos, NM. 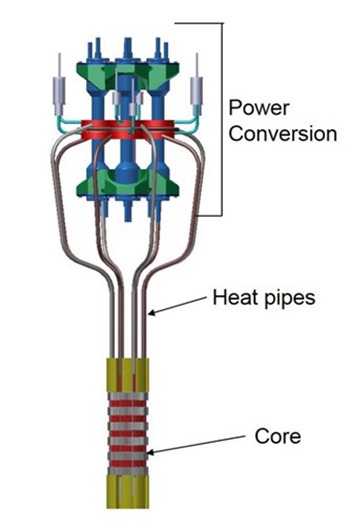 “We developed this technology at the Laboratory in partnership with NASA and the National Nuclear Security Administration,” said Patrick McClure, who served as project lead for Kilopower at Los Alamos and is now a partner in SpaceNukes.

“By creating our own company, we’re hoping to be able to reach potential new sponsors who will want to take this technology to the next level and put it into space.”

Kilopower is a small, lightweight fission power system capable of providing various ranges of power depending on the need.

“We think that nuclear power is needed for humans to exist and thrive in outer space, and we’ll go wherever we’re needed to make that happen,” said Dave Poston, who designed the reactor at Los Alamos and is another partner in SpaceNukes, which is named after his softball team since 1997.

“This licensing agreement demonstrates how tech-transfer should work: the government and national laboratories invest in technologies that are unproven and advance them far enough to make them commercially viable.”

SpaceNukes is pursuing opportunities with NASA for a lunar surface reactor and have presented their ideas to the U.S. Air Force and Space Force for reactor concepts for cislunar space.

Poston and McClure are listed as the inventors on the patent that forms the basis of the licensing agreement. They are led by Andy Phelps, a long-time Bechtel executive and former Los Alamos National Laboratory associate director. Their goal is to commercialize the Kilopower technology and see a reactor in space in the next few years.