Is There New Hope for UK’s Wylfa Nuclear Project?

Is There New Hope for UK Wylfa Nuclear Project?

The BBC reports that there are “fresh talks” underway to save £20bn Wylfa nuclear plant from oblivion. The fat lady may not have sung her last aria about the plant according to letters sent by Horizon, the UK business unit that was working with Hitachi to build the 2700 MB project (twin 1350MB ABWRs).

Map showing the location in the UK of the proposed Wylfa nuclear project. Image: Horizon Nuclear

Hitachi pulled the plug on the site at Wylfa on Anglesey two weeks ago citing a distinct lack of government commitment to guaranteed rates and equity investment.

The strike price offered by the government to Hitachi was £75/Mwh which was less than 80% of what it offered for the Hinkley Point C project. The lower price would mean over the years billions of pounds less in return on the investment. Hitachi walked away from the project as much for this reason as any other. Also, the government offered a one-third equity stake which was insufficient as a confidence building measure for private investors.

However, since then, according to the BBC, Wylfa developer Horizon Nuclear Power sent two letters to UK government ministers that disclosed talks with other “third parties” are continuing. That “third party” is reported to be Westinghouse. The firm has a unique advantage in that its AP1000 LWR type AP1000 has passed the UK Generic Design Review and can be built in the country.

The Westinghouse AP1000 pressurized water reactor successfully completed review by regulators in the UK, who concluded the Generic Design Assessment (GDA) by issuing Design Acceptance Confirmation (DAC) and Statement of Design Acceptability (SoDA) for the Westinghouse AP1000 technology. The DAC and SoDA were issued in March 2017 by the Office for Nuclear Regulation (ONR) and the Environment Agency (EA), respectively.

Westinghouse had at one time plans to build three 1150MW AP1000s at the Moorside project, but lost its chance due to two factors. Toshiba, which owned Westinghouse at the time, withdrew from Moorside and all of its nuclear projects citing global financial difficulties. Also, Westinghouse itself declared bankruptcy due to the termination of the U.S. V C Summer project in South Carolina. Westinghouse was subsequently purchased by Brookfield, a Canadian equity investment firm.

While Westinghouse is unlikely to position itself as the engineering procurement and construction (EPC) firm for a revival of Wylfa, and perhaps Oldbury, it could be energized to sell its reactors to whomever could assemble the funding to pick up the projects. A revised and enriched UK financial package would be a key success factor.

The chief executive of Horizon Nuclear wrote to the UK government’s Business, Energy and Industrial Strategy Secretary Alok Sharma on September 22 and again on September 28. In the letters, Horizon’s Duncan Hawthorne asked for a “short extension” on the deadline to announce the government’s decision on whether it would allow planning permission for the original Hitachi plans for Anglesey. Instead of rolling up the sidewalks this month, Horizon asked for an extension to December.

Hawthorne’s second letter to the energy secretary said: “Since Hitachi Ltd’s announcement to cease development activities associated with the Wylfa Newydd Project, Horizon has been engaged in discussions with third parties that have expressed an interest in progressing with the development of new nuclear generation at the Wylfa Newydd site.

“These discussions are still at an early stage and it is felt that a short deferral would allow time for Horizon and those interested parties to determine whether, and if so how, the Wylfa Newydd DCO Project could be taken forward in Hitachi Ltd’s absence.”

Horizon did not specifically name Westinghouse, but other news media reports in the UK have cited Westinghouse as being the “third party.”

The BBC noted that Horizon said it could not reveal any more details about the talks, or who was involved, due to discussions being “commercially sensitive”.

Stay tuned as this is a developing story

His trenchant call for reason comes after Hitachi announced last month that it was scrapping plans to build two UK Advanced Boiling Water Reactors (ABWR) at the Wylfa Newydd nuclear site in north Wales, blaming the lack of a viable financing structure as a reason for the decision.

A key area where EDF wants answers is whether the government will fish or cut bait on the use of the regulated asset base (RAB) proposal has been the subject of a government consultation which concluded that it has the potential to reduce the cost of raising private finance for new nuclear projects. The government has dithered endlessly about making a decision to proceed with this method of financing large nuclear projects.

The Times said EDF wants a tax on UK household energy bills to help pay for the Sizewell C project with other options including the British government taking a stake.

EDF and China’s China General Nuclear (CGN) are 80% and 20% shareholders in the Sizewell C project. The cost of the project has been estimated at £18bn, although this has not been confirmed by either EDF or CGN.  Chinese state owned enterprises have a 33% equity stake in the Hinkley Point C project.

After Sizewell C, CGN was set to build a or or more HPR1000, or Hualong One, reactors at Bradwell in Essex.

Four of these units were built and commissioned in China. However, as part of that deal, Westinghouse released China from having to pay royalties on the use of the design for its own purposes if it ramped up the power above 1350 MW. The CAP 1400 was developed by the State Nuclear Power Technology Corporation (SNPTC).

The 1,400 MW design, also known as Guohe One, is intended for deployment both in China and overseas, SPIC said. It is China’s second indigenous Generation III reactor design, following the HPR1000, or Hualong One. China’s National Energy Administration approved the design in January 2014. It passed a safety review by the National Nuclear Safety Administration in February 2016.

In May 2016, the CAP1400 design passed the International Atomic Energy Agency’s generic reactor safety review. This does not clear the design for use, but reviews the quality of safety documentation. Use of the CAP1400 plant is still dependent on it meeting country-specific standards and requirements, although passing the IAEA review will make this easier.

Hao Hongsheng, general manager of SPIC’s nuclear energy department, told the Global Times that SPIC is promoting the Guohe One brand for export and is discussing potential partnerships with countries including Turkey and South Africa. Turkey has plans for a third nuclear site on the west coast of the Black Sea, but has not formally committed to the project. Prospects for South Africa are even less certain as that nation is considering SMRs due to their being much less costly that larger full size plants.

The results of the IAEA review means meant it could now sell the technology, based on a US design, to other countries and without getting approval from the American makers of the original. It also marks a shift towards domestically produced technology that has been accelerated by the ongoing tensions with the United States.

One CAP 1400 reactor could meet the average annual energy demands of more than 22 million residents and cut greenhouse gas emissions by more than 9 million tonnes.

US / DC Based Energy Impact Center Widens Its Circle of Collaboration

The engineering data is downloadable directly from the website for public use. Future versions ae expected to include neutronics analysis, probabilistic risk assessment, detailed equipment specifications, structural design and environmental impact assessments. An economic analysis is also available on the EIC website.

“After our February launch, we experienced an outpouring of support and an influx of interest to participate,” said EIC’s director of Stakeholder Relations Michelle Brechtelsbauer.

EIC has now announced an expanded cohort of organizations actively collaborating to support OPEN100. Collaborators in the OPEN100 project include: Framatome of France, Studsvik of Sweden, the UK’s National Nuclear Laboratory, Siemens, Pillsbury, the Electric Power Research Institute, as well as the US Department of Energy’s Idaho National Laboratory and Oak Ridge National Laboratory. 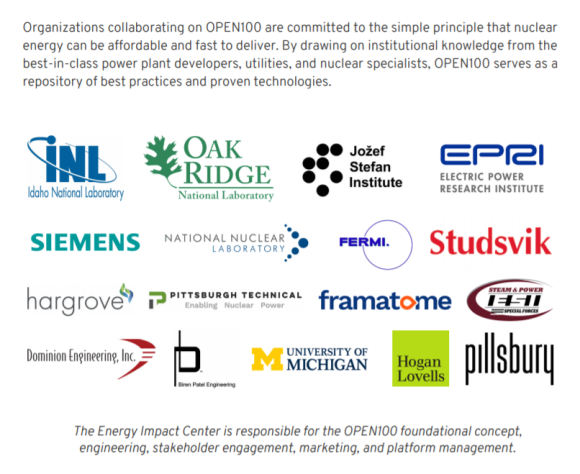 “Each organization brings unique expertise and a shared commitment to the simple principle that nuclear energy should be affordable and accessible,” Brechtelsbauer said.

“The diversity of skills is noteworthy, with several organizations advising on aspects of core design, equipment vendors providing cost modelling, engineering firms advising on component integration, and others assisting with activities that range from construction scheduling to regulatory compliance.”

OPEN100’s engineering files are now accompanied by a detailed construction timeline and an interactive economics dashboard, each providing greater transparency for project stakeholders.

“With OPEN100, we aim to encourage the growth of a robust developer industry, one that relies on a set of common standards that taps into an existing supply chain and enables fast-tracked licensing,” said Brechtelsbauer.

The new rocket will enable the U.S. military to operate spacecraft in cislunar space, which is the region outside Earth’s atmosphere and extending out to just beyond the Moon’s orbit.

An artistic impression of a cislunar rocket (Image: DARPA)

“Gryphon is committed to providing high-end technical solutions to our nation’s most critical national security challenges,” said P.J. Braden, CEO of Gryphon. “We are proud to support DRACO and the development and demonstration of NTP, a significant technological advancement in efforts to achieve cislunar space awareness.”

According to World Nuclear News, the objective of the DRACO program is to demonstrate a NTP system in orbit. NTP uses a nuclear reactor to heat propellant to extreme temperatures before expelling it through a nozzle to produce thrust. Compared to conventional space propulsion technologies, NTP offers a high thrust-to-weight ratio around 10,000 times greater than electric propulsion and a two-to-five times greater specific impulse than chemical propulsion.

Existing power and research reactors typically operate on low-enriched uranium, usually containing up to 5% uranium-235. HALEU fuel, which is enriched to between 5% and 20% uranium-235, will be required by many advanced reactor designs that are under development in both the commercial and government sectors, but such fuel is not yet commercially available. HALEU offers improved reactor economics, greater fuel efficiency, enhanced safety and proliferation resistance, lower volumes of waste and other advantages.

Centrus Energy is currently working under a three-year, USD115 million cost-shared contract with the US Department of Energy to deploy 16 of its AC-100M centrifuges at its Piketon, Ohio, facility to demonstrate HALEU production.

Gryphon Technologies Inc. is a transformational leader in providing digital engineering, cyber, cloud solutions, predictive analytics and technical solutions and services to national security organizations. From science and technology, research and development, to design, to construction, to operations and sustainment, to decommissioning and disposal; our experience across this spectrum informs our approach to each stage, allowing us to deliver maximum value to our customers in each of our engagements.

1 Response to Is There New Hope for UK’s Wylfa Nuclear Project?