Rosatom, the Russian state nuclear corporation, is promoting the use of its multi-purpose fast neutron research reactor (MBIR) which is under construction at the Research Institute of Atomic Reactors (NIIAR) in Dimitrovgrad in the Ulyanovsk region of Russia, located about 1,600 miles east of Moscow. The state owned enterprise is hawking its capabilities and soliciting partnerships on an international scale.

It is creating an International Research Center (IRC) to be a home for cooperative R&D and test projects. According to the June 2020 briefing, four nations have signed up so far –  the Czech Republic, Hungary, Poland, and Slovakia  The briefing says these arrangements, and others like it, will support the IRC’s ambitions to become a world class center of excellence for testing materials to be used in fast neutron reactors.

The purpose of the MBIR construction effort  is to have a high-flux fast test reactor with unique capabilities to implement the following tasks:

MBIR will be used for materials testing for Generation IV fast neutron reactors including high temperature gas-cooled, molten salt, and lead-bismuth designs. Experiments that are proposed to be undertaken include measuring the performance of core components under normal and emergency conditions.

In mid-June Rosatom released details of a government briefing that indicated the R&D facility will be operational in 2025. The project broke ground in 2015 and was scheduled to be finished in 2020.  According to a 2018 progress report, that date has bee pushed back by five years, but did not give a reason for the delay. The project is expected to cost $1.1 billion.

The MBIR is a 150 MWt multi-loop sodium-cooled fast research reactor. It will have a design life of up to 50 years, and will use MOX fuel.  When complete it will replace the BOR-60  fast reactor which has been in operation at NIIAR since 1969.

Russia’s June 2020 announcement may be a competitive response to the May 2020 U.S announced $230M in funding as the first step in a multi-year commitment through the Advanced Reactor Demonstration Program to upgrade the nation’s capabilities to support development of advanced reactors. A key facility will be the versatile test reactor.

It will have three different development and demonstration pathways.

The project will be housed at the National Reactor Innovation Center (NRIC) at the Idaho National Laboratory. The NRIC will provide private sector technology developers the necessary support to test and demonstrate their reactor concepts and assess their performance. This will help accelerate the licensing and commercialization of these new nuclear energy systems.

Rosatom, the state owned enterprise that operates the BN-600 fast reactor that is in commercial service, says it has submitted the paperwork needed to support a request to extend the reactor’s life from 2025 to 2040 at which point it would be 60 years old.

According to the proposal, extending the life of the reactor by 15 years would displace the burning of 33 million tonnes of coal on fossil fueled power plants.

The two-stage process of life extension involves technical and economic feasibility analysis and justification. The technical stage will evaluate safety requirements for reactor components that cannot be replaced over the entire service life of the plant.

A modernization program that began in 2009 replaced the steam generator and made unspecified safety upgrades.

The economic analysis will address the cost of running the plant and the payments it receives for the generation of electricity. as Unit 3 of the Beloyarsk nulear power plant.

The BN-600 is a sodium-cooled fast neutron reactor which started operation in 1980. (Gen_IV Briefing – Operating Experience of the BN-600 – PDF file) 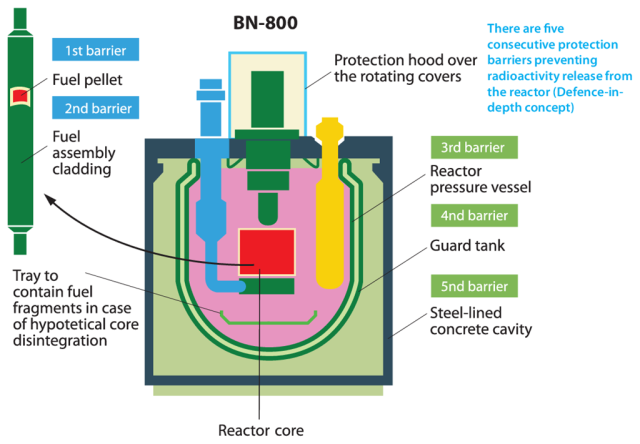 World Nuclear News reports that the sodium-cooled BN-series fast reactor plans are part of Rosatom’s Proryv, or ‘Breakthrough’, project to develop fast reactors with a closed fuel cycle whose mixed oxide (MOX) fuel will be reprocessed and recycled.

In addition to the BN-600 reactor, the 789 MWe BN-800 fast neutron reactor – constructed as Beloyarsk unit 4 – entered commercial operation in October 2016. This is essentially a demonstration unit for fuel and design features for the larger BN-1200 being developed by OKBM Afrikantov.

X-energy announced it has teamed with Nuclear Fuel Industries (NFI) to be the exclusive counterpart to supply fuel to the Japanese high-temperature gas-cooled reactor (HTGR). X-energy is purchasing the compact press equipment that can make annular fuel compacts for the “prism-type” HTGR core from Japanese-based NFI.

X-energy has been manufacturing its patented TRISO-X fuel for over three years, and to date, it is the only U.S. company actively producing TRISO fuel. The company is currently engaging with the Department of Energy to further develop and design its TRISO-X fuel facility.

HALEU-based fuels will be required for most of the advanced reactor designs currently under development and may also be utilized in next-generation fuels for the existing fleet of reactors in the United States and around the world.

“With support from the U.S. Department of Energy, Centrus is proud to be leading the way in the development of a domestic source of HALEU that can meet a wide range of commercial, nonproliferation and other national security requirements,” said Daniel B. Poneman, Centrus President and CEO.  (DOE Briefing on HALEU production – PDF file)

“Providing an assured, domestic supply of HALEU will help restore U.S. nuclear leadership internationally, and is a prerequisite for the United States to play a major role in building and fueling the world’s nuclear reactors and setting global standards for nuclear safety and nonproliferation. We appreciate the dedicated work by the NRC on this initial step and look forward to working with them as the process moves forward from here.”

In 2019, Centrus entered into a three-year, $115 million cost-shared contract with the U.S. Department of Energy to deploy its AC-100M centrifuge technology and to demonstrate production of HALEU.

The demonstration program is on schedule and on budget, with the first set of outer casings for the centrifuges delivered to Piketon after being manufactured in Oak Ridge, Tennessee.

Upon final approval of this license amendment, Centrus would be licensed to enrich uranium up to 20 percent U-235. Next-generation reactors and fuel designs will require a range of enrichment levels, but many are expected to be as high as 19.75 percent. A number of advanced reactor and fuels developers have announced plans to use HALEU-based fuel in their designs.

Centrus’ Piketon, Ohio, facility is already licensed to enrich uranium to a Uranium-235 (U-235) concentration of up to 10 percent.

A recent report by the U.S. Nuclear Fuel Working Group cited HALEU as a key step toward re-establishing U.S. leadership in advanced nuclear technology. This echoes the findings of an April 2020 survey by the U.S. Nuclear Infrastructure Council in which U.S. advanced reactor companies identified the availability of HALEU as the number one issue that “keep(s) you up at night.”

High-Assay Low-Enriched Uranium is further enriched so that the U-235 concentration is between 5 percent and 20 percent. While this is still far below the levels needed to produce weapons or power U.S. Navy vessels, HALEU offers unique advantages as an advanced nuclear fuel for both existing and next generation reactors, including greater power density, improved reactor performance, fewer refueling outages, improved proliferation resistance, and smaller volumes of waste.

The AFCP is part of the UK Government’s £180M Nuclear Innovation Program, and is focused on the development of skills, knowledge and capabilities in the areas of advanced recycle and waste management and advanced nuclear fuels.

NNL will draw on Lucideon’s expertise in its flash (field enhanced) sintering technology to significantly improve the production of advanced nuclear fuels, through new developments in the structure and performance of materials.

Lucideon has made a multi-million investment in flash sintering technology – which centers around an electric field being applied to a ceramic at specific temperatures – at its Stoke-on-Trent headquarters.

The partner agreement will also see Lucideon collaborate with the University of Manchester, who will provide specialist resources to support the development.

Lucideon has carved out a niche as experts in the nuclear industry, in areas including the development of novel materials and processes, materials analysis, complex testing and additive manufacturing.

(WNN) World Nuclear Association has published a first-of-a-kind Expanded Summary of the latest edition of its biennial nuclear fuel report. The Association is making the summary, which describes the major conclusions of the 2019 edition of the report, freely available.

“The increased projections in all scenarios of The Nuclear Fuel Report reflect the renewed recognition of nuclear generation’s roles, both in meeting the need for a reliable supply and contributing to our clean energy future,” World Nuclear Association Director General Agneta Rising said.

“By making the main findings of the Report available more broadly in this new summary we hope to better inform key decision makers, as well as provide a valuable educational tool that will provide everyone with a broader understanding of the key issues facing the nuclear industry today.”

Published biennially since the 1970s, The Nuclear Fuel Report is a highly authoritative publication used as a reference by industry and state authorities worldwide. The 48-page Expanded Summary of the report’s 19th edition covers the report’s key findings – in particular, supply/demand projections in different stages of the nuclear fuel cycle and nuclear generation projections for the next 20 years – and explains the methodology and assumptions underlying the report’s three scenarios for future nuclear fuel demand and supply.

This site uses Akismet to reduce spam. Learn how your comment data is processed.