Plans by the Department of Energy (DOE) and the Idaho National Laboratory (INL) to build the Versatile Test Reactor (VTR) and complete it this decade got a boost this week. Two firms with deep expertise in sodium-cooled advanced reactors have teamed up to collaborate on a proposal to DOE/INL for a partnership on a cost sharing plan to develop the facility.

According to press releases and a blizzard of social media posts from the two firms, GE Hitachi Nuclear Energy (GEH) and TerraPower say they plan to collaborate in the development of a public private partnership to design and construct the Versatile Test Reactor (VTR) for the US Department of Energy (DOE).

CD-2/3 are expected by 2022 at which point if Congress approves the funding, construction of the facility will begin.

Adding to the mix is a third party, nuclear utility Energy Northwest says it will also support the joint GEH-TerraPower effort. Significantly, this would be the latest in a series of engagements by the utility which is also leading the UAMPS consortium that wants to be the first customer of NuScale’s 60 MWe small modular reactor (SMR) that will be built at a site at the Idaho lab. Energy Northwest is the operator of the the Columbia Generating Station, a commercial nuclear plant in Washington.

The ball for this effort got rolling last November when the Battelle Energy Alliance (BEA), which manages the INL, issued an Expression of Interest asking for responses from firms interested in forming a partnership for a cost-sharing arrangement to develop the VTR.

The VTR will be used as a test platform to provide a source of fast neutrons to support the development of advanced reactor technologies. (Fact sheet on test configurations PDF file) 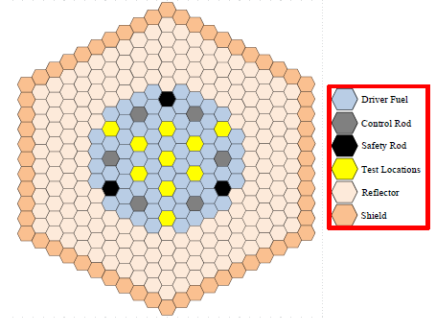 DOE said it will decide as early as 2021 whether to proceed with building the VTR. Congress must then decide whether to fund it. Construction could begin in 2022 with operations starting in 2026.

The reactor is expected to be a version of the GE Hitachi PRISM power reactor, which is based on the EBR-II.  (Briefing – VTR Technical Overview – PDF file) The EBR-II reactor was a sodium-cooled fast reactor prototype that operated at the Argonne National Laboratory Idaho site from 1963 to 1994.

Not their First Rodeo

This isn’t the first rodeo for GEH with the VTR. In November 2018 The Idaho National Laboratory awarded a subcontract to GE Hitachi Nuclear Energy (GEH) to support the conceptual design, cost/schedule estimate and safety framework activities for a proposed fast spectrum Versatile Test Reactor (VTR). The test reactor will be a critical facility for the development of innovative nuclear fuels, materials, instrumentation and sensors.

The subcontract is funded by the U.S. Department of Energy Office of Nuclear Energy’s Versatile Test Reactor program, which is investigating what it would take to establish a reactor-based fast-spectrum neutron irradiation capability in the United States by 2026.

Bechtel will also support the project using its expertise in project management for cost, schedule, and related management systems.

Establishing a fast spectrum test reactor ensures continued U.S. technology leadership in nuclear energy innovation. Currently, only a few capabilities are available for testing fast neutron reactor technology in the world and none are in the U.S.

Christine King has been selected by Idaho National Laboratory as the next director of the lab’s program that oversees new nuclear energy developments and private sector partnerships.

As director, King will lead efforts on behalf of the Department of Energy (DOE) Office of Nuclear Energy to provide the nuclear community with access to the technical, regulatory and financial support necessary to accelerate innovative nuclear energy technologies toward commercialization.

King will lead the lab’s Gateway for Accelerated Innovation in Nuclear (GAIN) program which uses commercial partnerships to advance the research and development of new forms of nuclear power.

“There is a growing number of nuclear innovators in the private sector that require access to the unique assets of the DOE’s national laboratory complex to achieve their commercialization goals,” said Wagner. “Christine’s experience in engaging with the nuclear community, particularly helping startups find their footing by connecting them with appropriate resources, makes her the ideal candidate to take on this unique leadership role.”

According to the press statement, King joins INL with 26 years of experience in the nuclear energy industry, “including a history of leading strategic initiatives with multimillion-dollar budgets, fostering relationships and expanding programs. ”

There she built relationships with advanced nuclear entrepreneurs and members of the investment community. The experience helped her understand the challenges facing emerging nuclear technologies especially being able to compete within the broader energy and capital markets for funding.

“GAIN is a unique endeavor with a broad scope and a challenging mission, and there are a lot of exciting advances happening in nuclear right now.  Our national lab system is uniquely positioned to help the advanced nuclear community commercialize their designs,” King said.

Since its inception in November 2015, GAIN has built a unique bridge between the DOE complex and the advanced nuclear community. GAIN has focused on simplifying access to national laboratory resources, collaborating across the industry to address high-priority needs, and accelerating work with the U.S. Nuclear Regulatory Commission (NRC) for advanced reactor licensing.

The National Reactor Innovation Center (NRIC) was recently established at INL to accelerate private-sector demonstration of advanced reactors. As part of the national strategy to expand nuclear energy markets for U.S. commercial suppliers, NRIC will play a key role through nuclear reactor demonstration and testing campaigns.

NRIC is the nation’s principal program to provide the capability to build and demonstrate advanced reactors and is a critical element in achieving INL’s vision to change the world’s energy future. (Briefing – PDF file) 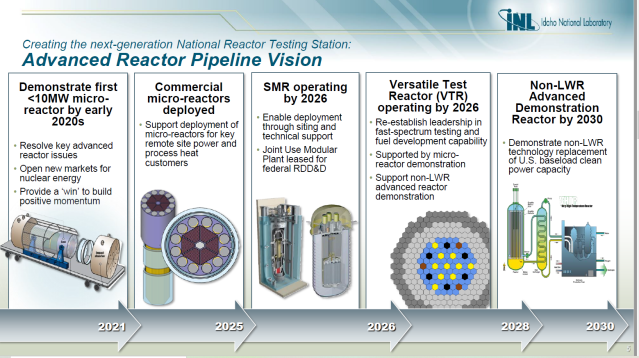 NRIC at INL is seeking an engineer to support its mission of enabling the demonstration of private-sector nuclear reactor concepts. An ideal candidate will be working to minimize the time required to build and operate novel reactor concepts.

This may include coordinating experimental campaigns using existing DOE facilities, developing new facilities and/or capabilities to enable testing and demonstration, ensuring the availability and production of fuel for reactor demonstrations, and preparing sites for operational demonstration reactors.

This position will have a key role in the execution of infrastructure investments necessary to carry out future testing and demonstration campaigns. Ashley Finan, the newly appointed director of the NRIC, tweeted a note about the the job posting which closes 2/24.