(Wire Services) Tokyo Electric Power (TEPCO) said last week it will submit a plan regarding the decommissioning of five reactors at its Kashiwazaki-Kariwa nuclear station, the world’s biggest atomic plant. The five units involved are 1100 MW BWRs built in the 1980s.

The net effect of the plan, if implemented, could take to a national total of 26 the units set to be decommissioned by Japanese nuclear operators, or nearly half their pre-disaster fleet. TEPCO will be left with just two of its 17 units both newer 1300 MW ABWRs at the same site built in the mid-1990s.

Nuclear power met about 30% of Japan’s electricity requirements before the March 2011 tsunami, but the forced shutdown of all its reactors resulted in record imports of coal and liquefied natural gas to replace the lost generating capacity and significantly increased Japan’s CO2 emissions.

TEPCO’s president will meet soon with authorities in the city of Kashiwazaki-Kariwa in Niigata prefecture, where the power station is located, to explain the utility’s response to a request to mothball the five reactors.

Japan is unique in that it gives what essentially amounts to veto power to provincial governments over reactor restarts even after the nuclear safety agency gives its OK.

Media reports in Japan said Kashiwazaki city mayor Masahiro Sakurai had originally asked Tepco to shut all of the older units at Kashiwazaki Kariwa – Units 1 to 5 – in return for endorsing the restart of the two newer reactors, Units 6 and 7. He later said he would be happy if even one of the units was decommissioned.

In 2017, Tepco received initial regulatory approval to restart Units 6 and 7 at Kashiwazaki Kariwa. The station has seven reactors with a total capacity of 7,965 MW, equal to about 20% of Japan’s total installed nuclear capacity.

Niigata Provincial Gov. Hanazumi Hideyo said there will be no discussions on reinstating Kashiwazaki-Kariwa until the prefecture has concluded its own inspections which if he has his way will never take place.

The communities derive substantial economic benefits from the plants when they are open including consumer spending from the workforce payroll and investments in community infrastructure by the utility. These benefits in the past would have been enough to get the locally elected officials on the side of the utility, but at this site that has not happened.

For its part, TEPCO has undermined community confidence in its operations with a long history of a lack of transparency at the site. Problems with communications to surrounding communities have included misinformation or no information about fires, the handling of low-level radioactive waste, and earthquake damage to non-nuclear structures.

In short, there is no trust, nor love lost, between TEPCO and local stakeholders who do not care as much about nuclear energy as a tool to diminish the effects of climate change as they do about slamming the door on TEPCO’s restart of the reactors there once and for all. This is a horse that has left the barn and TEPCO does not seem to have any way to get it back. 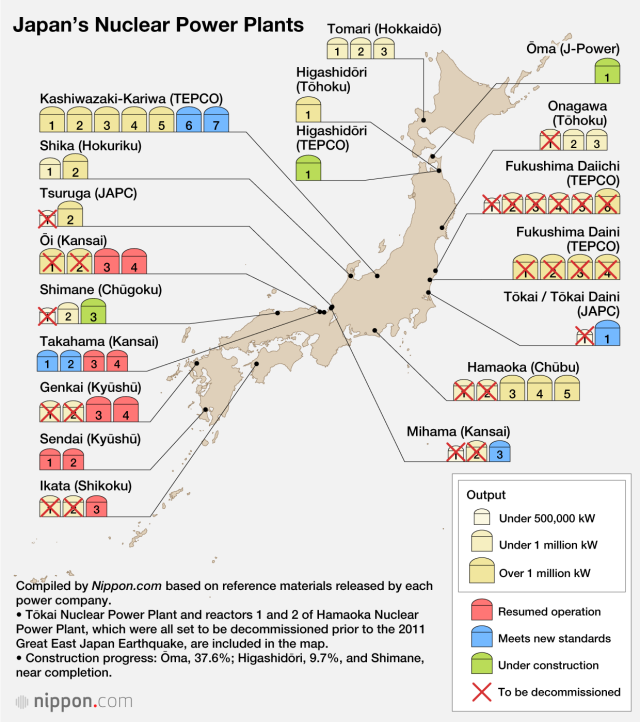 (Nikkei) None of the six Japanese nuclear reactors that have been cleared to restart by regulators are expected to become operational this year because of local opposition and delayed safety measures, It is a huge setback to the nation’s energy policy. Of the 25 facilities that applied for restart, the Nuclear Regulation Authority has approved the requests for just 15 and six that have been approved for restart are still in cold standby.

In addition, four of the nine nuclear reactors restarted under tougher safety standards, ut in place after the 2011 Fukushima Daiichi disaster, face the possibility of a shutdown next year as they are running behind in security upgrades. The changes to security measures, which are intended to thwart terrorist attacks, have been criticizedby Japanese utilities as excessive, but so far the Nuclear Regulatory Agency has not backed down.

These delays complicate the government’s plan to have nuclear energy account for 20% to 22% of the electricity mix by 2031. The plan is premised on roughly 30 reactors being in operation. As of now it does not look like that is going to happen.

During the previous fiscal year, the nine working reactors supplied less than 10% of the nation’s electricity. Under the Paris climate agreement, Tokyo seeks to cut greenhouse emissions by 26% between fiscal years 2013 and 2030, but the reduction only amounted to 8.4% in fiscal 2017.

The fate of another 10 reactors currently under review is also uncertain. The NRA is expected to update the safety guidelines soon in response to revised scientific studies about earthquakes, tsunamis and volcanoes.

To curb the costs of expensive safety and security upgrades, TEPCO is partnering with Chubu Electric Power, Hitachi and Toshiba to establish a joint venture that will provide nuclear plant maintenance and handle reactor decommissioning.

The four firmsalso plan to jointly operate the Higashidori nuclear plant in north Japan’s Aomori Prefecture, whose construction has been put on hold since the 2011 Fukushima accident.

(NucNet) The British government must make a decision on the future finance framework for new nuclear power by the end of 2019 and should support new nuclear generation if it wants to meets its net zero-emissions target by 2050, a parliamentary report said this week.

The report cites ten areas where the government is falling behind in decarbonization of the nation’s various energy sectors. It warned that the UK is not on course to meet its existing legally binding climate change reduction targets for 2023 to 2032.

The committee concluded that it is not possible to directly compare the costs of different power generation technologies, but “the government is right to support nuclear power subject to it representing value for money, because full lifecycle emissions from nuclear power will help the UK to achieve its emissions reduction targets.”

The report punts on building new nuclear power stations saying that having a sucessful financial system to pay for them is a key success factor. To this end the report said the government must make a decision on implementing a regulated asset base (RAB) framework for nuclear power by the end of this year.

In the case of a nuclear power station, this recovery of costs would be through consumers’ energy bills. Depending upon the details of the model used, investors can start to receive their return on investment during the construction of the power plant. This can increase the attractiveness of nuclear power stations to investors, who currently must invest many years before the plant will start generating power and produce income.

The committee also called on the government to set out what steps it has taken for the deployment of a first-of-a-kind small modular nuclear reactor (SMR) by 2030.

The London-based Nuclear Industry Association reacted to the report saying it is imperative the government urgently put in place the necessary regulatory and financial frameworks to enable the development of new nuclear stations.

“The RAB model has the potential to deliver significant cost reductions to large infrastructure projects, making nuclear in the UK attractive to a wider pool of investors, reducing cost to the consumer and delivering the clean generation needed for us to reach net zero,” said NIA chief executive Tom Greatrex.