Ohio Nuclear Plants Saved but at What Price? 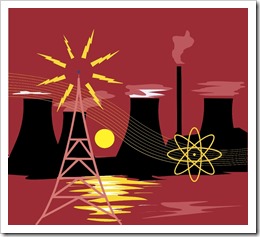 The Ohio legislature passed and the governor signed into law a measure to raise the rates bankrupt utility First Energy can charge its customers to keep two fully capable nuclear plants open. Davis-Besse, located near Toledo and the Perry plant east of Cleveland will not be decommissioned after all.

According to the Toledo Blade, First Energy spent $50 million on legislative races and lobbying to get the bill passed.

Critics of the legislation pulled no punches. On VOX, a liberal leaning media service, columnist David Roberts wrote, “Ohio just passed the worst energy bill of the 21st century. He called it “a corrupt bailout for dinosaur power plants that screws renewable energy in the process.”

Roberts, aka @drvox , mounts a market oriented assault on the bail out and hurls a number of well aimed attacks at the ways First Energy and the legislature handled the quest for the subsidies. The whole piece is worth a read because he addresses many of the reasons why some pro-nuclear advocates are wildly conflicted about Ohio’s political decision to save its nuclear power plants.

Meanwhile, First Energy said it would go ahead with a scheduled refueling of Davis-Besse which is a big deal all on its own.

The new law is appropriately labeled as a bailout for nuclear power in Ohio. Residential users will get a new $0.85/month charge. Add to it charges for commercial and industrial users, and the combination will pump $150 million into two nuclear plants. The bill adds $20 million for solar energy projects but ends energy efficiency and alternative energy mandates in 2020.

Gov. Mike DeWine said this plan saves jobs and protects the environment. He even mentioned climate change. This is unusual for a republican elected official especially with the over hang of irrational and unrelenting climate change denial from the Trump administration.

“It’s important for the state of Ohio to be able to have a significant amount of energy that is created to be carbon free having nuclear plants today is the only way we’re going to achieve that,” DeWine said.

The American Petroleum Institute lobbied heavily against the law launching attack ads against the bill in the news media. The Nuclear Energy Institute (NEI) pushed hard for it.

Maria Korsnick, CEO of NEI said;
“The majority of Ohio’s clean energy will remain in operation thanks to legislation passed by the legislature. Ohio’s nuclear power plants do more than churn out 90 percent of the Buckeye state’s clean power, they support 4,300 jobs and contribute $30 million per year to roads, school and public services. “

Generation Atomic, a pro-nuclear advocacy group, had organized a series of campaigns n Ohio to save the plants with volunteers knocking on doors to make the case for carbon-free electric power. On its Facebook page the group said the passage of the bailout bill “was a great day for Ohio and a great day for the planet.” 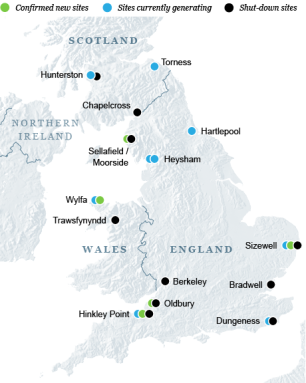 (WNN) The UK government has proposed use of a regulated asset base (RAB) model to finance nuclear construction, as an alternative to contracts for difference (CfD). Under the RAB model, power sector regulator would estimate a value of new nuclear projects and arrive at a fixed rate of return for investors. The revenues, from all UK consumers paying upfront through electricity bills, would enable a project company to recover approved costs and generate a return on capital to finance them.

Payments would increase over the construction period in line with project spending and then decline over the operating life of the asset, for up to 60 years. It is similar to the US rate base model in states with regulated utilities but with greater flexibility on the part of of the regulatory agency to determine what is ‘reasonable’ as the basis of a feed-in tariff.

The RAB model has been used successfully in the UK to fund other large infrastructure projects, including the £4.2 billion Thames Tideway sewer and storm water tunnel.
Significantly, the new RAB proposal could revive the prospects of Hitachi subsidiary Horizon and Toshiba subsidiary NuGen building new nuclear plants at Wylfa in Wales, Oldbury in Gloucestershire and Moorside in Cumbria.

The Department of Business, Energy and Industrial Strategy said that “Our assessment has concluded that, by providing regulated returns to investors, a RAB model has the potential to reduce the cost of raising private finance for new nuclear projects.”

It could also “reduce … the risk for developers while limiting the impact on consumers’ bills in the long term.” The government would offer “protection to investors.”

The agency said that the UK government places a high priority on building 16 GWe of new nuclear capacity to supply reliable power beyond the operational span of existing units and to reduce CO2 emissions.

(WNN) Having failed to progress earlier intentions regarding small modular reactor (SMR) development, the UK government has pledged £18 million towards development of a small modular reactor by a large consortium led by Rolls Royce. The firm is working on a 220 MWe PWR unit. Rolls Royce has designed three generations of naval reactors for submarine propulsion since the 1950s.

The government says it will commit GBP18.0 million (USD22.4 million) of initial funds to support the development of the power plant as part of the Industrial Strategy Challenge Fund.

“Our design will bolster the UK’s ambitions to tackle climate change while taking a further step towards creating an estimated 40,000 British jobs, reinvigorating a vital part of the country’s advanced manufacturing base and potentially generating hundreds of billions of pounds in export revenues,” the British engineering firm said.

Rolls Royce said the SMR design’s technical and commercial foundations have been validated, it said, by the UK Research and Innovation team’s assessment for the Industrial Strategy Challenge Fund; the independent assessment by the government’s Expert Finance Working Group; and by due diligence led by the Department for Business, Energy and Industrial Strategy. The design has not yet been submitted for review by the UK generic design review process which can take up to four years.

Work To Start On Three New Nuclear Plants in China

(NucNet) China has started construction of three new nuclear power plants in the provinces of Shandong, Fujian and Guangdong, the country’s energy regulator said this week according to reports in the state owned news media.

Li Fulong, head of the development and planning office of the National Energy Administration, said construction had begun at the Shidaowan nuclear station near Rongcheng in Shandong province, at Zhangzhou in Fujian and at Huizhou Taipingling in Guangdong.

There have been credible reports that China will not proceed with commercialization of the HTGR design at this time which leaves open the work on the PWRs.

At the Zhangzhou site, in the east of the country, China National Nuclear Corporation (CNNC) is planning two Generation III 1000 MW Hualong One plants.

If confirmed, the construction of new nuclear plants would end a three-year hiatus in new-build approvals in China.

According to the International Atomic Energy Agency, the last commercial reactor units to start construction in China was the Fangchenggang-4 Hualong One in December 2016.

Head spinning news from France, which is experiencing a record heat wave, comes in the form of a disturbing bulletin from EDF.

The effort to build a new 1600 MW EPR unit at the Flamanville nuclear station in northern France will be delayed by about three years due to problems with the weldings, the company said this week

Last month regulator ASN said EDF will have to repair eight faulty pipe welds in the secondary main cooling loops before the start of commercial operation of Flamanville-3.

EDF said in its first-half earnings statement that “at this stage, commissioning cannot be expected before end of 2022.”

The company said it is studying three possible scenarios repairing the welds. Once this is done, and discussed with ASN, the company will release details of “the implications of the selected scenario in terms of planning and cost.”

This news is not a good signal to the French government which is considering several moves related to the future of the nuclear fleet. One of the proposed actions is to buy out the private sector investors in EDF and make it a 100% government operation. The other decision, which is also pending, is to decide which plants to close earlier and which later depending on their age and the demand for power along with decarbonizaion plans.

Construction of new plants will depend very much on having a viable design of Ffench origin which can be built time and within budget. Separately, France lags behind other nations in developing its own small modular reactor design.

7 Responses to Ohio Nuclear Plants Saved but at What Price?