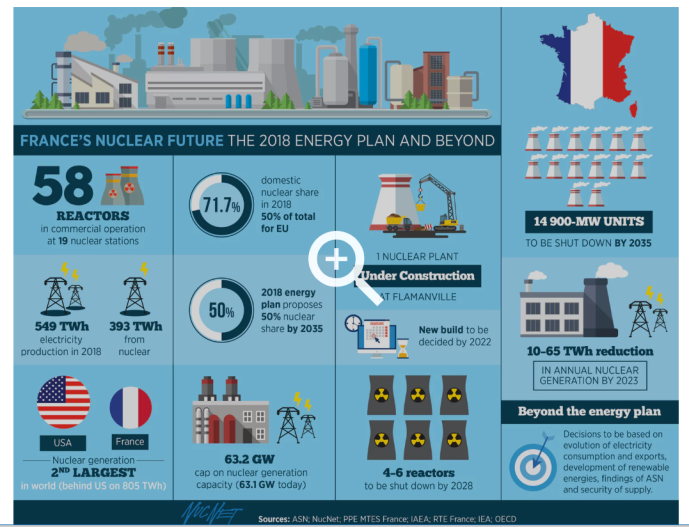 More than 45 years later, president Emmanuel Macron’s administration is struggling to juggle its need for nuclear and the long-term security it offers with the realpolitik of growing support for the far-right National Rally party (pro-nuclear) and the Green party (anti-nuclear). Read the full story here

Politico reports that some of the candidates running for the Democratic nomination support nuclear energy.

Six more candidates support nuclear energy generally, but you’ll have to read the tea leaves to figure out the differences.

Finally, in what can only be described as the wing nut wing of the Democractic party, three other candidates oppose it. One of them believes in moonbeams and scented candles as a basis for running the government.

Over in Ireland, Mark Menezes, US under-secretary for energy, told The Irish Times that the State should follow the lead of the US in embracing liquified natural gas (LNG) and nuclear power.

The newspaper reports that Mr Menezes said Ireland should replace its peat and coal-fired stations with liquified natural gas (LNG) imported from the US, which is a much cleaner fuel than coal or peat.

He added that Ireland should embrace nuclear energy as these “plants are emission-free”.

“The life expectancy can be several generations. When you look at the cost of that facility over its lifetime, it’s literally pennies per kilowatt hour.”

He said that Ireland should embrace nuclear energy as these “plants are emission-free”.

“The life expectancy can be several generations. When you look at the cost of that facility over its lifetime, it’s literally pennies per kilowatt hour,” he said.

(WNN) Eight welds in the main steam transfer pipes that penetrate the two walls of the containment of the Flamanville EPR must be repaired before the reactor is commissioned, France’s nuclear safety regulator, the Autorité de Sûreté Nucléaire (ASN) has told EDF. The utility will assess the decision’s impact on the cost and schedule of the project.

(WNN) Nuclear fuel will not be loaded into the core of the first-of-a-kind EPR at Olkiluoto until at least the end of August, Finnish utility Teollisuuden Voima Oyj said. Under the previous schedule, fuel loading had been due to take place this month. It was not clear at this time as to the new cause of a delay, but it appears that an accumulation of earlier delays has pushed back startup activities.

Hot functional testing of the 1600 MWe pressurised water reactor began in December 2017 and was completed in May last year, 50 days later than planned.

TVO announced on May 23 that it had started work to install liquid absorbers featuring bitumen to resolve the vibration issue. At that time, the company said installation of absorbers was expected be completed in the early summer.

(WNN) Unit 2 of the Taishan nuclear power plant in China’s Guangdong province has been connected to the electricity grid, becoming the second EPR reactor to reach the commissioning milestone after Taishan 1. Unit 2 is expected to enter commercial operation later this year.

Taishan 1 achieved first criticality on 6 June last year and was connected to the grid on 29 June. It was declared to be in commercial operation on 13 December.

The loading of fuel into the core of unit 2 began in May this year and it attained a sustained chain reaction for the first time on May 28.

Riyadh plans to issue a multibillion-dollar tender in 2020 to build its first two commercial nuclear power reactors. Originally expected last year, the tender has been delayed several times. It is now expected to be released by the end of 2019. The value of the project could be between $10-15 billion.

The United States, South Korea, Russia, China and France are competing for the business. Westinghouse, which has been hit by a decline in the U.S. nuclear power industry, would likely sell components to Saudi Arabia in any deal involving U.S. technology. Westinghouse is now owned by Brookfield Asset Management Inc. Its largest investor is the sovereign wealth fund of Qatar with a 7% stake.

Perry told Congress that South Korea cannot freely enter into an agreement to build reactors in Saudi Arabia with U.S. technology unless Riyadh has signed a pact with Washington on nonproliferation standards, known as a 123 agreement.

Saudi Arabia has pushed back against nonproliferation standards including limits on enrichment of uranium and reprocessing of plutonium. Concerns about a potential nuclear arms race in the Middle East got more serious last year when Saudi Crown Prince Mohammed bin Salman told CBS News that he does not want to acquire a nuclear bomb but would develop one if Iran did.

(NucNet) The US Department of Energy (DOE) has announced $49.3m in funding for nuclear energy research projects in 25 states as part of the government’s Nuclear Energy University Program (NEUP) and Nuclear Science User Facilities (NSUF) program.

Seven other university-led projects will receive more than $1.6m for research reactor and infrastructure improvements providing important safety, performance and student education-related upgrades to a part of the 25 university research reactors.

The DOE said it has selected two university-, one national laboratory- and three industry-led projects to qualify for funding under the NSUF programme to investigate important nuclear fuel and material applications.

(WNN) The Turkish-Japanese project to build a 4560-megawatt nuclear power plant at Sinop on Turkey’s Black Sea coast has been halted following a feasibility study that estimated the cost would be more than double that original thought, Turkish president Tayyip Erdogan told the Nikkei news service on June 26 during the G20 summit in Osaka.

Erdogan said, “Feasibility studies show that the cost of a proposed nuclear power plant in the city of Sinop is more than double the initial estimate, and the Japanese-backed project has been halted,”

The project was slated to build four 1100 MW Atmea PWR type reactors based on a joint design by Areva and Mitsubishi. However, rising costs related to the first of a kind new build and a lack of investors appear to have sidelined the project for now.

(Universe Today) NASA is looking at development of nuclear powered rockets that could send astronauts to Mars in 100 days instead of the six months that it would take to send them there using chemical propulsion.

First, the nuclear power propulsion units would have to lifted off from earth using chemical rockets, and once in orbit, could be fired up to complete the journey.