US SMR Firms Mark Progress Milestones in US and Canada

GEH submitted its application to CNSC in March this year for a service agreement with the CNSC to conduct a vendor design review (VDR) of the BWRX-300. A service agreement is a legal document that establishes the terms and conditions between the CNSC and a reactor vendor.

Also, in March 2019, GEH sent a letter of intent to begin pre-licensing work to the U.S. Nuclear Safety Commission (NRC).

The BWRX-300 is a 300 MWe small modular reactor (SMR) derived from GEH’s 1520 MWe Economic Simplified Boiling Water Reactor (ESBWR) design. According to GEH, the BWRX-300 leverages the design and licensing basis of the ESBWR, which received design certification from the US Nuclear Regulatory Commission in 2014.

In parallel with the prelicensing review, the GEH design team is looking at ways to simplify the reactor design, reduce plant construction costs, and lower operations and maintenance costs for the BWRX-300. The research aims to identify ways to reduce plant completion costs by 40-60% compared with other SMR designs in development.

The firm received $1.9M in funding from the U.S. Department of Energy to pursue these engineering objectives. The project will bring together a team consisting of Exelon Generation, Hitachi-GE Nuclear Energy (HGNE), Bechtel and the Massachusetts Institute of Technology (MIT) to examine ways to simplify the reactor design, reduce plant construction costs, and lower operations and maintenance costs for the GEH BWRX-300, a 300 MWe small modular reactor.

“We are designing the BWRX-300 small modular reactor to be cost competitive with gas and renewables,” said Jon Ball, executive vice president of nuclear plant projects for GEH. “This review is an important step in the commercialization of this breakthrough technology.”

Work on the BWRX-300 is also supported by funding from Dominion Energy of Virginia. That utility has a COL from the NRC for a full size ESBWR for the North Anna III project, but has not announced plans to move forward with construction.

Dominion Energy’s funding of the BWRX-300 provides seed money to further work that could lead to commercializing this technology. The company has no plan at this time to build one at any of its commercial nuclear stations.

“We believe that nuclear power has a vital role in ensuring a clean, reliable, and cost-effective supply of electricity to meet the needs of a growing economy,” said Dan Stoddard, Chief Nuclear Officer-Dominion Energy.

“We also believe the innovations GE Hitachi is pursuing with the BWRX-300 Small Modular Reactor have the potential to make it a strong competitor in the marketplace. Our view is that a modest investment now to support further development of this technology is in the interest of both companies.”

About the CNSC Prelicensing Review

The CNSC’s pre-licensing vendor design review is an optional service to provide an assessment of a nuclear power plant design based on a vendor’s reactor technology. It is not a required part of the licensing process for a new nuclear power plant, but aims to verify the acceptability of a design with respect to Canadian nuclear regulatory requirements and expectations.

CNSC says on its website that these findings will be taken into account in any subsequent construction license application, increasing the efficiency of technical reviews.

The combined Phase 1 and 2 review, according to CNSC, ” will focus on identifying any issues that could become fundamental barriers in a licensing process for a new build project in Canada while assuring that a resolution path exists for any issues that may be identified.”

The duration of each review is estimated based on the vendor’s proposed schedule. A Phase 1 review typically takes 12–18 months and a Phase 2 review takes 24 months.

CNSC told World Nuclear News it had received applications from NuScale Power and Westinghouse. Given that both designs have progressed beyond the basic engineering phase, the CNSC said the first two stages of the VDR can be combined.

The CNSC is now involved with ten pre-licensing VDRs, all for small reactors with capacities in the range of 3-300 MWe.   CNSC updates the status of licensing views on its website. Scroll down from the top of the web page to find two tables – one for current reviews and another for review efforts that are under development.

Westinghouse told a nuclear energy trade newsletter last week that it aims to design, test, manufacture and site a demonstration unit of its eVinci heat pipe reactor design by 2022 and will fund the effort with $15.7 million. The company is currently developing an electrical demonstration unit and plans to demonstrate manufacturing capability by 2020.

The compact design will also have a small boundary footprint, opening up new siting opportunities to be closer to industrial facilities and population centers.

Westinghouse is communicating with U.S. and Canadian nuclear regulators and aims to license the design for commercial deployment by 2025, pending a successful testing phase. The firm has not said yet where the testing will take place or whether it will involve one or more DOE national labs or the Canadian National Lab in the efforts

World Nuclear News reported in 2018 that Westinghouse is developing the eVinci micro reactor as a small nuclear energy generator for decentralized generation markets, such as remote communities, or arctic mines. The company told WNN that the reactor design is a combination of nuclear fission, space reactor technologies, and over 50 years of commercial nuclear systems design, engineering and innovation.

The reactor has a solid core, built around a solid steel monolith with channels for fuel pellets and heat pipes that remove heat from the core, and has minimal moving parts. Fuel is encapsulated in the core. The company says the design significantly reduces proliferation risk and enhances overall safety. The heat pipes enable passive core heat extraction and inherent power regulation, allowing autonomous operation and inherent load following capabilities.

The reactor is designed to run for more than ten years without refuelling. It can provide combined heat and power from 200 kWe to 25 MWe, and process heat up to 600 degrees Celsius.

Westinghouse said in October last year it aims to develop and demonstrate the eVinci reactor in less than six years, a timescale it says is possible primarily due to the small size and high technology readiness level of the individual components.

The company plans to develop a full-scale electrical demonstration unit to reduce technology gaps and demonstrate ability to manufacture it by the end of 2019, and aims to qualify the eVinci micro reactor for commercial deployment by 2024.

Westinghouse was buoyed in March 2019 with a $12.9 million grant from the Department of Energy. The firm said it will spend $28.9 million to demonstrate the readiness of the technology of its 25-MWe eVinci micro-reactorby 2022.

The government money, which is covering about half of the costs, will cover some of the design, analysis, licensing to manufacture, siting, and testing work.

He will take over the job on August 19th. In the interim, an executive committee comprised of members of Westinghouse’s senior leadership team will manage the company’s day-to-day affairs.

José Emeterio Gutiérrez will step down as president and chief executive officer of Westinghouse Electric Company on 31 July following more than a decade with the company.  He will continue to have a role with Westinghouse as a member of a global advisory board, which is being established to provide guidance on international strategy.

It’s not clear how the firm’s SMR initiatives will move forward under a new CEO. In 2014 Westinghouse walked away from its investment in an LWR type SMR, being developed with funding support from Amerem, a Missouri based nuclear utility. The lack of a customer and partner in design and licensing doomed the project.

Unlike GE-Hitachi and NuScale, Westinghouse has not announced funding nor investor support from any partners for its latest SMR effort. Westinghouse is also investing R&D money in a 450MW lead-cooled fast reactor. (Fact sheet).  This is also a stand alone project which has no outside partners or funding. It may be for competitive reasons the firm has not made any announcements about funding or technical expertise from partners.

Sooner or later it it may find it prudent to disclose interest by potential customers via cooperative agreements in design and licensing work that also put cash on the barrel head to help pay for these activities. Also, in terms of risk, the expertise of outside firms can value to a project with capabilities the lead firm can’t deploy on its own.

The lack of this kind of support is exactly what sank B&W’s mPower joint effort with TVA which walked away from the deal opting instead for an application for an Early Site Permit at the Clinch River site that did not reference a specific SMR design.

Maybe there is something in the Westinghouse culture that leans toward a “go it alone” approach to developing new technologies.  That might have worked in the second half of the 20th century. Now two decades into the 21st century, collaboration is the name of the name facilitated by incredible computer capabilities that the designers of the first and second generation of nuclear reactors could only dream about. Westinghouse will have a better chance of making it to the finish line with one or more advanced designs if it realizes that the complexity of the technologies its working takes place in an era where no one has all the answers.

Westinghouse, formerly a wholly owned subsidiary of Toshiba, filed for bankruptcy in March 2017 after significant delays and rising costs at the Vogtle and V C Summer AP1000 nuclear projects in the US, for which it was supplying its AP1000 reactor technology. The V C Summer project was cancelled, but the Vogtle project continues to make progress.

Westinghouse emerged from bankruptcy in 2018 as a reorganized company after the completion of its sale to Brookfield WEC Holdings for $4.6B. The private equity firm is expected to be aggressive in seeking a high corporate hurdle rate for returns on its investment.  The equity firm’s largest investor is the sovereign wealth fund of Qatar which has a 7 percent stake in the Canadian equity firm.

Westinghouse has also been lobbying in DC for a 123 Agreement between the U.S. and Saudi Arabia so it can respond to that country’s expected RFP later this year for two full size reactors. So far the 123 negotiations between the two countries have been stalled since September 2018 over the issue of uranium enrichment. 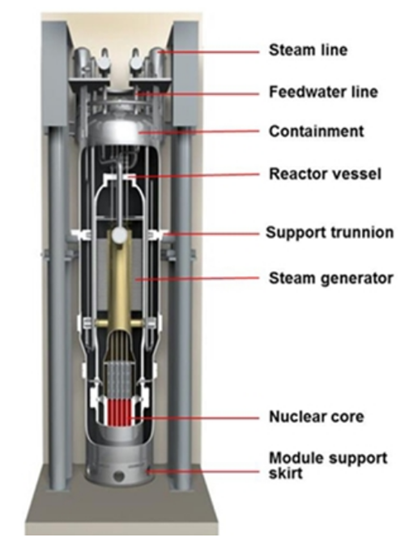 NuScale Power LLC and Sargent & Lundy announced this week a memorandum of understanding (MOU) for a strategic engineering and investor relationship to support deployment of NuScale Plants worldwide.

Sargent & Lundy, a global leader in power engineering with more than 60 years of experience in nuclear unit design, will bring its expertise to the larger U.S.-led team working to build NuScale’s small modular reactor.

Under the terms of the MOU, Sargent & Lundy will become a NuScale investor, proceed with development of the standard plant design based on the U.S. Design Certification Application.

Fluor Corporation will continue to be the EPC for plant construction as planned and will work with NuScale and Sargent & Lundy on aspects of the NuScale standard plant design. Fluor is also a key investor in NuScale.

NuScale’s technology is the world’s first and only SMR to undergo design certification review by the U.S. Nuclear Regulatory Commission (NRC). The NRC is scheduled to complete its review of NuScale’s design in September 2020.