The Department of Energy (DOE) has taken the next step in a daisy chain of policy and administrative actions needed to support efforts by U.S. companies to develop and deploy new reactor technologies and to have access to advanced uranium-based fuels to run them.

DOE has opened the public comment period on the draft environmental assessment for a proposal to fabricate High Assay Low Enriched Fuel (HALEU) at Idaho National Laboratory’s Materials and Fuels Complex (MFC) and/or the Idaho Nuclear Technology and Engineering Center (INTEC) both located on the Arco desert about 50 miles west of Idaho Falls, ID. 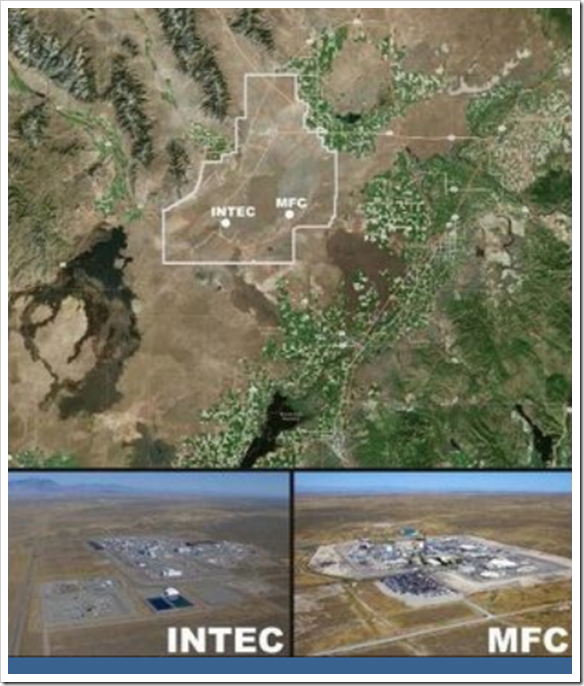 The Idaho lab’s MFC and INTEC Facilities. Note the Craters of the Moon ancient lava flows located due west of the site. The greenery to the east comprises towns and farms along the Snake River. The American Falls Reservoir is at the bottom center of the top photo.

The high-assay low enriched uranium (HALEU) fuel would be fabricated from blended-down used fuel from the now-decommissioned Experimental Breeder Reactor-II (EBR-II), which operated at the site from 1964 to 1994.

DOE has been using an electrorefiner at MFC to down-blend spent fuel that contains highly-enriched uranium material generated by EBR-II. This process produces high-assay low-enriched uranium (HALEU) that is currently stored at INL.

DOE proposes to expand the capabilities at MFC and INTEC to convert this metallic HALEU into fuel for research and development purposes.  HALEU contains a higher enrichment (by percentage) of uranium-235 — a fissile isotope in nuclear fuel that produces energy — than fuel used in the current fleet of U.S. power reactors.  Conventional light water reactors (LWRs) use low-enriched uranium (LEU) fuel, (three-to-five percent uranium-235) while HALEU contains between five and 20 percent.

Currently, there are no commercial facilities in the U.S. immediately capable of producing HALEU, and several advanced reactor designers have expressed interest in using HALEU fuel with their designs to achieve higher efficiencies and longer core lifetimes.

“There are several U.S. companies pursuing advanced reactor designs that would use fuel enriched with higher levels of uranium-235, and need a source so they can conduct the research and development needed to bring these new technologies to market,” DOE Deputy Assistant Secretary for Nuclear Technology Research and Development John Herczeg said in a media statement.

“Being able to provide a source of this fuel would support this research and development and aligns with the Office of Nuclear Energy’s mission to advance nuclear power as a resource capable of meeting the nation’s energy, environmental and national security needs.”

Earlier this year the US Senate approved a proposal for a $15M pilot program to demonstrate to the blending down of used HEU fuel from the USA’s naval programme to produce useable HALEU.  The Nuclear Energy Institute (NEI) supported the measure as well.

The draft environmental assessment (DEA) prepared in accordance with the National Environmental Policy Act is posted for public review online.

The report found that “the potential for a nuclear criticality exists due to the quantity and form of material being processed. However, engineered and administrative controls would be incorporated into the facility and process operations to prevent and mitigate worker risk associated with this hazard.”

The draft review also asserts that radiological releases during normal operations would not result in adverse health impacts.  The report added that additional waste volumes would be small compared to current disposal volumes at INL. The major portion of cleanup work at the INL is taking place at other facilities at the desert site and not at MFC.

The preferred action identified in the Environmental Assessment calls for establishing the capability at INL to fabricate HALEU ceramic and metallic fuels from the HALEU produced through the electrometallurgical treatment system currently operating at INL, and by using other small quantities of HALEU stored at INL.

World Nuclear News notes that EBR-II was a 62.5 MWt demonstration reactor, typically operating at 19 MWe, and was used to demonstrate a complete sodium-cooled breeder reactor power plant with onsite reprocessing of metallic fuel, as well as providing heat and over 2 TWh of power to the Idaho facility during its operating life.

WNN also notes EBR-II was used for testing materials and fuels for larger fast reactors and became the basis of the US Integral Fast Reactor, proving the concept of fuel recycling and passive plant safety characteristics.

The final assessment is expected to be issued as early as December, according to a handout DOE gave to Butte County commissioners earlier this month.

The Idaho Falls Post Register reported that Karin Brown, management/program analyst for DOE-Idaho, told the Butte County Commissioners, “Money has come through Congress on this to help with this. It’s a pretty exciting piece of work that we’ll be able to move forward with.”

The public comment period will last through 11/30/18. Comments can be emailed to haleu@id.doe.gov, or mailed to David Herrin, 1955 Fremont Ave., Idaho Falls ID 83415-1222. Paper copies of the proposal are also available on request.

Did you Know How MFC Got Its Name?

The name of the Materials Fuels Complex (MFC) used to be Argonne West (ANL-W) when the facility was operated by Argonne National Laboratory (ANL) and the University of Chicago. In 2005 DOE consolidated contractor accounts for the lab and merged ANL-West with the rest of the INL’s R&D operations.

But how did the name MFC come about? Legend has it that when the site was ANL-W the cafeteria there used to bake excellent chocolate chip cookies, and also other flavors,  every day at about 2 PM.

Workers at the site, wanting to have a living memory of the site’s tradition, voted for MFC, not because it stands for Materials Fuels Complex, but because it really means “mighty fine cookies.”

Dan Yurman ~ For breaking nuclear news follow me on Twitter @djysrv or https://www.twitter.com/djysrv ~ About this blog and disclaimers for NeutronBytes Blog ~ https://neutronbytes.com/2014/08/31/welcome-post/ ~ Email me: djysrv@gmail.com ~ Mobile via Google Voice 216-369-7194 ~ Header Image Credit: http://apod.nasa.gov/apod/ap110904.html ~ ** Emails sent by readers about blog posts are considered to be comments for publication unless otherwise noted. ** The content of this blog is protected by copyright laws of the U.S. "Fair use" provisions apply. The RSS feed is for personal use only unless otherwise explicitly granted.
View all posts by djysrv →
This entry was posted in Nuclear. Bookmark the permalink.