The two-year research and development project will examine the efficiency, design and economics of using the IMSR to produce hydrogen ijn commercial quantities using the hybrid sulfur process.

Terrestrial is interested in investigating the feasibility and cost effectiveness of this method of generating hydrogen from water which may be more efficient than high-temperature steam electrolysis. The project aims to demonstrate the commercial and industrial-scale viability of pairing the hybrid sulfur process with an ISMR plant for large-scale production of hydrogen which will have zero greenhouse gas emissions.

“By combining forces with an energy leader such as Southern Company, we can bring this revolutionary technology to industrial markets,” said Simon Irish, CEO of Terrestrial Energy USA.

“Using an IMSR power plant to produce hydrogen more efficiently and economically is just one of many industrial applications of IMSR power plants beyond electricity generation.” 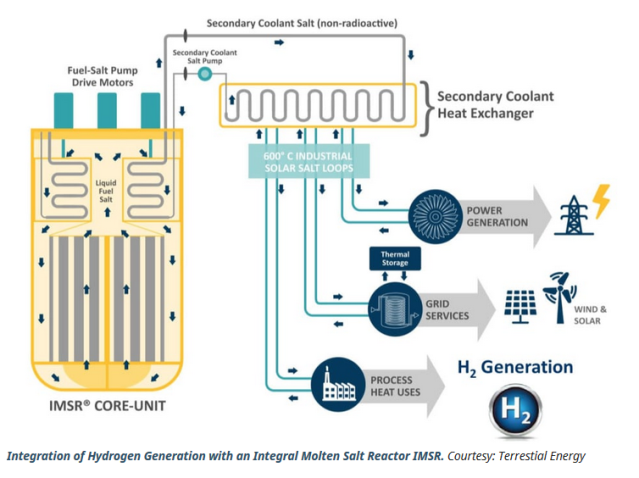 According to Terrestrial, besides current uses of hydrogen in ammonia production, petroleum refining, chemicals production and other industrial applications, hydrogen is expected to grow significantly as a storable energy carrier.

Future applications include all forms of transportation, thermal energy and energy storage. For instance, US firms like BNSF have been testing the use of hydrogen powered fuel cells to power train locomotives. 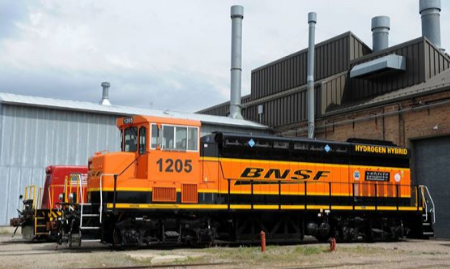 Noah Meeks, research engineer and project manager at Southern Company, said: “This is a potentially high-impact project that couples the benefits of molten salt reactors with the development of an advanced water-splitting process for hydrogen generation.”

In June 2017, Terrestrial began a feasibility study for the siting of the first commercial IMSR at Canadian Nuclear Laboratories’ Chalk River site. In March this year, Terrestrial and US utility Energy Northwest agreed a memorandum of understanding on the terms of the possible siting, construction and operation of an IMSR at a site at the Idaho National Laboratory in southeastern Idaho.

Molten salt reactors use fuel dissolved in a molten fluoride or chloride salt which functions as both the reactor’s fuel and its coolant. This means that such a reactor could not suffer from a loss of coolant leading to a meltdown. Terrestrial’s IMSR integrates the primary reactor components, including primary heat exchangers, to a secondary clean salt circuit, in a sealed and replaceable core vessel. It is designed as a modular reactor for factory fabrication, and could be used for electricity production and industrial process heat generation. Terrestrial aims to commercialise the modular reactor design – which can produce 400 MWt (190 MWe) of energy – in the 2020s.

Legislation To Help US Regain Lead In Nuclear Technology

(NucNet) A bipartisan group of senators has introduced legislation designed to help the US regain its lead in nuclear energy technology in the face of increasing global competition, the Washington-based Nuclear Energy Institute said.

Senator Cory Booker, a Democrat, said the bill will help accelerate energy innovation and support startup companies in the US that are investing billions of dollars into these next generation reactor designs.

Among other objectives, the legislation would create a pilot program to enter into long-term power purchase agreements between the federal government and a utility to buy electricity produced by early deployment of nuclear technologies.

“The [energy] secretary shall give special consideration to power purchase agreements for first-of-a-kind or early deployment nuclear technologies that can provide reliable and resilient power to high-value assets for national security purposes,” the bill says.

NEI president and chief executive officer Maria Korsnick praised the legislation, saying that a comprehensive plan to boost the country’s technological leadership in nuclear is exactly what is needed to help the US compete in today’s increasingly competitive global marketplace.

The bill is the latest in a series of important initiatives addressing near-term and future prospects for nuclear, the NEI said. Numerous states in the last couple of years have acted to preserve at-risk nuclear plants. The Federal Energy Regulatory Commission, PJM and ISO-New England are re-examining how they compensate and set prices for different generating technologies in light of recent premature nuclear plant retirements.

(NucNet) The nuclear industry must defend itself against the growing risk of cyberattack by investing in the continuous improvement of cybersecurity measures at all nuclear facilities and building “mutual assistance mechanisms and shared resources” for responding to cyberattacks, a report by the Washington-based Nuclear Threat Initiative says.

The NTI’s Nuclear Security Index report for 2018 also says the industry needs to improve the quality and quantity of cyber-nuclear experts.

The report says cyberattacks could lead to the theft of nuclear materials or an act of sabotage, potentially resulting in catastrophic public health and economic consequences.

“Government and facilities’ responses to the risk of cyberattacks too often are inadequate,” the report says.

It calls for effective cybersecurity measures – from incorporating cyber threats into threat assessments to mandating that nuclear facility licensees have cyber-incident response plans – must be incorporated into government regulations and facility operations.

But it says the challenge is not just for governments and regulators. Leaders, technical specialists, and operators at nuclear facilities must develop and implement plans that keep pace with the threat.

“Governments should require – and facility operators should implement – information and operational technology systems that are resilient in the face of the cyber threat,” the report says.

The reports warns that the cyber threat continues to evolve, outpacing defenses and regulations in many countries.

“Dedicated efforts are needed to embed cybersecurity best practices into the culture of nuclear facilities,” the report says.

Efforts to Use MOX Fuel at New Reactor Delayed 2 Years

NIKKEI – A nuclear power plant in northern Japan designed to use recycled fuel has been pushed back by two years and will not start operation until at least 2026, marking a major setback for the country’s commitment to drawing down its plutonium stockpile.

The announcement by Electric Power Development constitutes the third construction delay for the Oma plant. It comes amid heightened international scrutiny of Japan’s plutonium holdings, a product of the resource-poor country’s effort to create a self-sustaining energy supply.

The utility, also known as J-Power, cited a time-consuming screening process based on safety standards revised after the 2011 Fukushima nuclear disaster. J-Power had hoped to resume work late this year.

Plant construction began in 2008, but was paused after the Fukushima meltdowns. The work is less than 40% complete.

Francois de Rugy assumed the ministerial role on Tuesday after the departure of Nicolas Hulot, who quit in part over what he saw as the government’s slow progress in moving away from its dependence on nuclear power.

Mr De Rugy gave no signal of what changes to the mix he would want to see, saying only that the end of next month was the deadline for unveiling a multi-year energy production program. A first draft of that program was originally expected during the summer.

France derives about 75% – the highest percentage in the world – of its electricity from nuclear energy, with 58 commercial reactors operated by state-controlled EDF.

In 2015, the government of former president François Hollande established an energy transition law which set a target of reducing the nuclear share to 50% by 2025, a policy supported during his election campaign by president Emmanuel Macron.

Mr Hulot said in November 2017 this would not be realistic and suggested the deadline to be pushed back to 2035.

Poland produces most of its electricity from coal and has to look at cleaner technologies to comply with EU requirements on emissions reduction requirements.

Warsaw has planned to build its first nuclear power station for years but the project has faced a number of delays. The energy minister is a strong advocate of the nuclear, but faces difficulties in attracting the whole government’s approval. The big problem is money.

“The decision is that we are getting prepared until the moment when the financing is put together. This is a big problem,” Tchorzewski said in a public television interview.

(Times UK) Plans for a new nuclear power station in Cumbria are set to move closer to collapse next week, with the company developing the Moorside project expected to confirm that it is laying off the majority of its staff.

Nugen, owned by Toshiba, the troubled Japanese conglomerate, has been consulting throughout August on job cuts among its 100 employees after failing to secure a buyer. It is understood that it is preparing to sign off on cuts on Monday and to brief staff on Tuesday, with the most likely option resulting in the loss of at least 50 jobs.

If no buyer for Nugen is found before the end this year then the venture is likely to be abandoned altogether.

Toshiba has been involved in a three way dialog with the UK government and KEPCO which wants to buy the project from Toshiba. Sticking points have been the overall cost of the project and the level of government support, in the form of equity funding, for the project.