The announced closure of four nuclear power plants in Ohio and Pennsylvania will have severe environmental and economic impacts, according to a new report released on 4/16/18 by The Brattle Group.

Specifically, these closures would likely result in an increase of over twenty million metric tons of CO2 emissions, tens of thousands of tons of incremental air pollutants, and significantly higher electricity costs to consumers. It would also put hundreds of millions in GDP and thousands of jobs at risk for residents across Ohio, Pennsylvania and the broader region.

The increase in CO2 and several harmful air pollutants due to these closures will be a major setback to the region’s efforts to reduce emissions. In 2017, these four nuclear plants provided one and a half times as much zero-emission energy as the wind and solar resources across the entire PJM region. (see chart below)

Some advocates for closing nuclear plants in Ohio and Pennsylvania claim that renewables can make up the difference.  This is incorrect as both solar and wind power are highly variable. The majority of lost power generation capability would be made up, if needed, by natural gas plants. 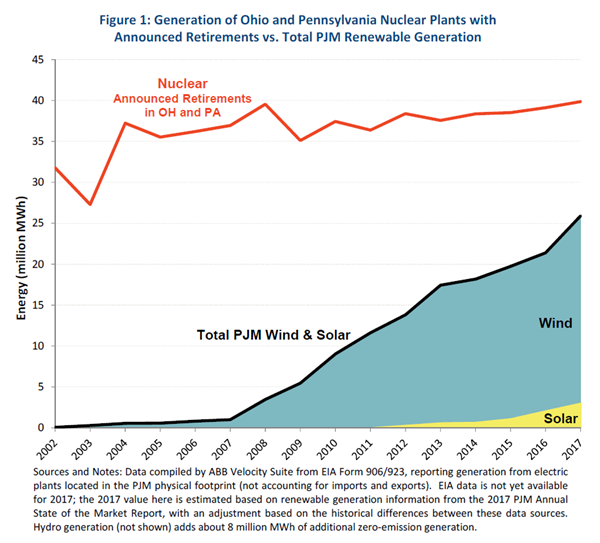 As western Pennsylvania and eastern Ohio are centers of natural gas production, due to the use of fracking drilling methods, the construction of these plants near these resources would inevitably be attractive to investors.

Potential use of load following to support renewables

There is an element of the nuclear industry, especially among developers of small modular reactors and advanced designs, that are building in “load following” for the plants. Most large nuclear plants, especially those built in the 70s 80s, run at 100% capacity all the time.

Load following would allow these reactors to generate electricity at lower levels of utilization during the day, if wind and solar are putting electricity into the grid, and at higher rates at night, or when weather is a factor, etc.  In either case, the nuclear plants can have the key role of keeping the grid stable to address the variable nature of renewables.

Role of the PJM Interconnect

The PJM is the largest electricity market in North America, covering all or part of 13 states including Ohio and Pennsylvania, and spanning from Illinois to New Jersey and Virginia.

The loss of these plants would quickly reverse the environmental benefits of all the PJM wind and solar resources developed in the region over the past 25 years – benefits which were supported with billions of dollars of customer and taxpayer investment through renewable energy credits and federal tax credits.

“As this report makes clear, policymakers should take note of the critical environmental and economic contributions of our nation’s nuclear plants, especially where their continued operation is threatened,” noted Brattle Principals and study authors Drs. Dean Murphy and Mark Berkman.

“Any discussion of Pennsylvania’s and Ohio’s energy futures must recognize the significant environmental and economic risks associated with allowing these four plants to close. The impending closures indicate a significant concession in their clean energy commitments.”

Additional findings regarding the impact of these closures from the Brattle report include:

“It is imperative that we act to prevent the closures of these four nuclear plants which contribute needed diversity to Ohio and Pennsylvania’s overall energy supply and provide residents a dependable power source in extreme weather situations.

Following Vermont Yankee’s shuttering in New England, we saw devastating effects. The loss of tax revenues forced local officials to make major budget concessions to the detriment of their residents, including cutting their municipal budget by 20 percent, drastically reducing police services and raising their property taxes by 20 percent.

Furthermore, in the year following the closure, carbon emissions increased by 2.5 percent due to nuclear energy being replaced by emission producing sources. It would be nothing short of irresponsible to allow the people of Ohio and Pennsylvania to share a similar fate.”

“If these plants close, the livelihoods of thousands of Ohio and Pennsylvania residents will disappear. The over 3,000 highly skilled individuals directly employed by these sites will leave to seek employment at other facilities still operating around the country,” said Lonnie Stephenson, President of the International Brotherhood of Electrical Workers.

“In total, thousands of jobs that directly or indirectly rely on the nuclear industry in this region will be lost. Positions at nuclear plants are good, well-paying jobs for hardworking residents, and without them the fabric of these communities will be torn apart.”

“Impact of Announced Nuclear Closures in Ohio and Pennsylvania” was prepared for Nuclear Matters by Dr. Dean Murphy and Dr. Mark Berkman of The Brattle Group.

This report follows the recently announced planned closures of Exelon’s Three Mile Island and FirstEnergy’s Davis-Besse, Perry and Beaver Valley plants, a decision the companies attribute to low power prices in wholesale markets and the lack of state and federal relief.

To develop the collective estimates outlined in the report, The Brattle Group drew from previous work estimating the impacts that the loss of the Ohio and Pennsylvania nuclear plants would have on electricity prices and emissions:

This latest report compares the results of these most recent previous studies with sensitivity cases in order to outline various approximations.

The group Nuclear Matters® is a national coalition that works to inform the public and policymakers about the clear benefits of nuclear energy. The coalition supports solutions that properly value nuclear energy as a reliable, affordable, safe and carbon-free electricity resource that is essential to America’s energy future.

Nuclear Matters engages stakeholders and energy consumers around the country to educate and activate them in support of current and future nuclear energy use and to promote solutions that will help to preserve this essential energy resource.

About The Brattle Group

The Brattle Group analyzes complex economic, finance, and regulatory questions for corporations, law firms, and governments around the world. We are distinguished by the clarity of our insights and the credibility of our experts, which include leading international academics and industry specialists.