Given its logistics and supply chain profiles, coastal sites are likely to be favored for these starts which will total 6 Gwe or more

China’s National Energy Administration said in March that the country will announce sites for the start of new construction of six-to-eight new nuclear reactors. The decision ends a two-year freeze on new starts.

The most likely coastal sites for new projects are shown in the table below. 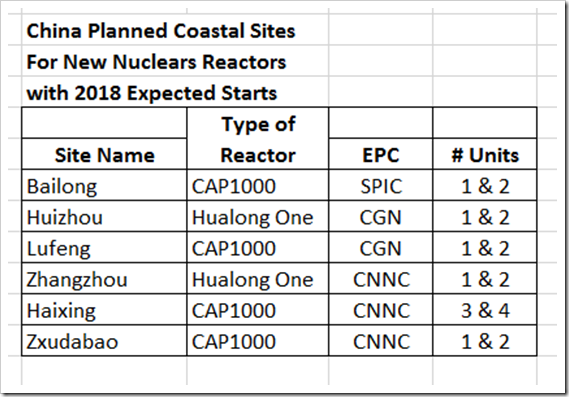 For a complete review of reactor technologies in China, see Nuclear Engineering International for May 22, 2014 – Chinese reactor design evolution

Fuel loading for the Sanmen reactors has been delayed due to unspecified “safety concerns,” but given the milestone that has been pushed back, the issue may be with the fuel assemblies themselves. Another possible reason is that China’s version of the ITAAC, which is the final safety documentation check before fuel loading, may have had some deficiencies.

(WNN) Indonesia’s National Atomic Energy Agency (Batan) has launched a roadmap for developing a detailed engineering design for its Experimental Power Reactor (Reaktor Daya Eksperimental, RDE). The design of the country’s indigenous small modular reactor is expected to be completed later this year.

The detailed engineering design document, together with the safety analysis report, will be an important requirement for it to achieve approval for the RDE design from the Indonesia’s Nuclear Energy Regulatory Agency (Bapeten).

“The detailed design means that the design is close to construction, and the ultimate goal is to determine how much the RDE will cost,” Sunaryo said.

The objective for the design and technology of the reactor is for it to be suitable for subsequent commercial use by utilities and independent power producers around the country, as well as for export.

Last year, Batan received a siting licence from Bapeten for the demonstration RDE reactor at its Serpong complex.

Batan is promoting the introduction of nuclear power plants in Indonesia to help meet the county’s demand for power. It envisages the start-up of conventional large light-water reactors on the populous islands of Bali, Java, Madura and Sumatra from 2027 onwards.

In addition, it is planning for the deployment of small HTGRs (up to 100 MWe) on Kalimantan, Sulawesi and other islands to supply power and heat for industrial use.

Thorcon announced in March that it has published on its web site the complete basic design of ThorConIsle, a 500 MW liquid fuel fission power plant. The floating plant is actually composed of two 250 MW units.

ThorConIsle is a complete 500 MW fission power plant, to be constructed in a shipyard, floated to a distant customer site, then settled to the seabed in shallow water.

Robert Hargraves, a spokesman for the firm, said in an email, “This design is well suited for the ThorCon prototype planned for the Indonesian archipelago, where testing could begin in 2022.”

The firm is developing the ThorCon 250 MWe design, and aims to commission one there in the 2020s.

In March 2017 Pertamina, Inuki and PLN completed a preliminary feasibility study on the Thorcon proposal which was positive, and the consortium is now seeking approval from BATAN. Subject to this, construction would begin in 2019 for 2025 operation, as the first nuclear power plant in Indonesia.