Interest grows in SMRs despite setbacks with full size reactors 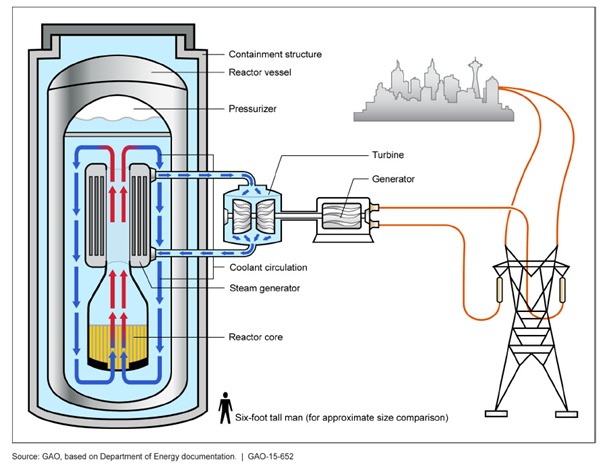 Kathryn McCarthy, CNL vice-president of research and development, said in the statement that CNL faces a very long journey before the construction of a prototype SMR reactor at Chalk River, but the expressions of interest represent a strong start to the process. CNL president and chief executive officer Mark Lesinski said in the statement that CNL wants to serve as the global hub of the SMR development community. CNL said a report summarising the findings will be made available to the public. For details: http://bit.ly/2v70qsG 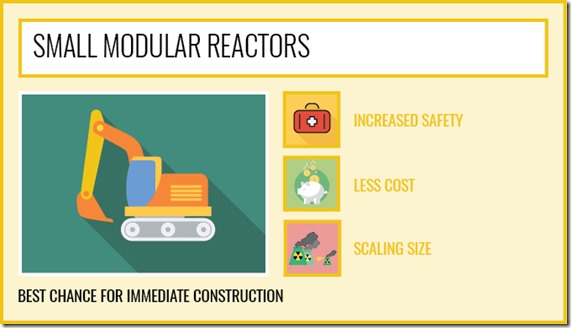 World Nuclear New reported that the Canadian nuclear science and technology organisation earlier this year released a long-term strategy including the goal of siting a new SMR on its Chalk River site by 2026.

It issued the request in June, to inform the conversation on the potential for an SMR industry in Canada and CNL’s potential role in bringing SMR technology to market. CNL hopes to gain a better understanding of its existing capabilities, technology gaps, needs and requirements, and overall market interest. The request for expressions of interest, which closed on July 31, 2017. 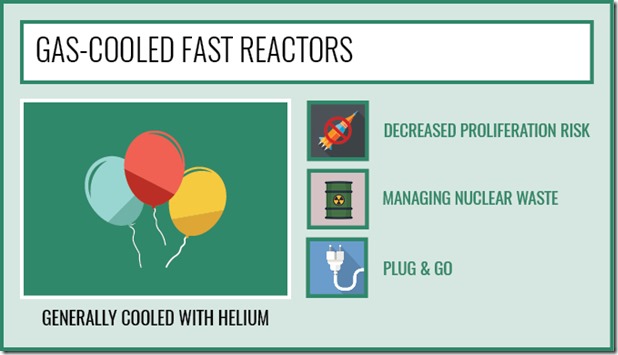 Advantages over traditional technologies include the ability to purchase and construct in a modular way, decreased up-front capital costs through simpler, less complex plants, and a reduced staff complement. 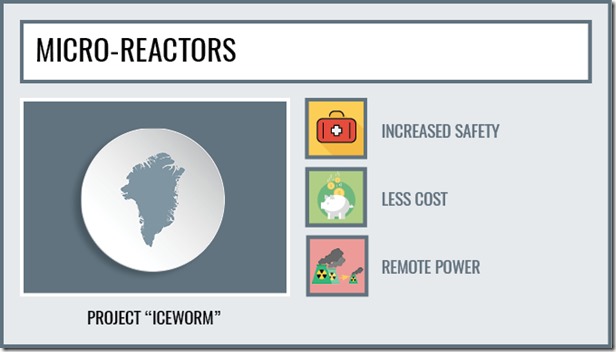 Designs can also bring greater efficiency and systems which are inherently safe. SMRs could also be integrated in overall energy plans with applications as varied as district heating, co-generation, energy storage, desalination, or hydrogen production. Small modular reactors are being developed with electrical power outputs of as little as 5-10 MW.

CNL president and CEO Mark Lesinski said the organization’s vision is to serve as global hub for the SMR development community.

“The request was issued to give us a better understanding of the industry’s interest in pursuing SMR technology, and the part that CNL could play in that process. I’m happy to say that the response has been beyond our expectations.”

Kathryn McCarthy, CNL’s Vice-President of Research & Development, said it represented a “very strong start” to the process of constructing an SMR at Chalk River. “The feedback we received from these stakeholders allows us to better shape our program, ensuring we have the right capabilities and expertise to meet the needs of industry every step of the way.”

CNL will now review and analyse the submissions received through the request, before publishing a summary of its findings. 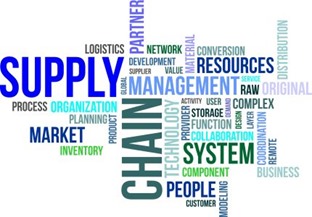 On September 6-7, companies interested in being part of the supply chain and searching for manufacturing opportunities around small modular reactors, next generation nuclear technology, nuclear medicine, and national security programs are invited to attend the Nuclear Suppliers Workshop at Pollard Technology Conference Center in Oak Ridge. It will be hosted by the U.S. Nuclear Infrastructure Council and the East Tennessee Economic Council.

For more information, visit https://eteconline.org/nuclearsuppliersworkshop/. If you have questions, you can contact Vince Gilbert at vince.gilbert@usnic.org or (202) 422-8238, or Tracy Boatner at tracy@eteconline.org or (865) 483-4577.

(NucNet) SMR LLC, a subsidiary of Florida-based Holtec International, has been granted access to the Oak Ridge National Laboratory (ORNL) by the US Department of Energy (DOE) in support of the development of the SMR-160 small modular reactor design. Holtec said DOE’s support will come in the form of a voucher worth $500,000, which will be used for access to “expertise and capabilities” at the national laboratory in Tennessee.

The funding will come from DOE’s Gateway for Accelerated Innovation in Nuclear (Gain) program, established to provide the US nuclear community with technical, regulatory and financial support in commercializing nuclear innovation.

SMR LLC will work with ORNL over the next year to develop the SMR-160 natural-circulation primary flow simulation engine and to perform a series of thermal-hydraulic stability analyses and simulations, Holtec said. SMR-160 is a small modular pressurized water reactor with a design electrical output of 160 MW. Development began in 2011.Saudi Arabia signs cooperation deals with China on nuclear energy 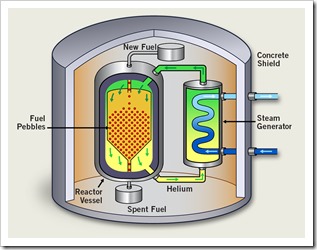 Saudi Arabia has been for years trying to diversify its energy mix so that it can export more of its oil, rather than burning it at power and water desalination plants.

State-owned The Saudi Technology Development and Investment Co (Taqnia) signed a memorandum of understanding with China Nuclear Engineering Group Corp to develop water desalination projects using gas-cooled nuclear reactors. China has made steady progress with the design of a high temperature gas cooled reactor design in the range of 200-300 MW.

In a separate report, SPA said Hashim Yamani, the president of King Abdullah City for Atomic and Renewable Energy (KACARE), which is responsible for the country’s nuclear plans, met officials in China on Aug. 23-24. Their discussions included cooperation in areas such as pre-feasibility study to build the first two nuclear reactors in the kingdom, and exploration for uranium and thorium.

Saudi Arabia at one time had ambitious plans for building 15 1000 MW+ nuclear reactors. It scaled back these plans as the price of oil plunged from over $100 bbl to half that amount severely cutting the oil kingdom’s revenue.  In January 2015 the government announced a long-term postponement of its plans for full size reactors.

One of the primary uses of nuclear energy will be to help Saudi Arabia to develop water desalination plants, of which it is a leading producer for domestic use and for exports.

The New Scientist reports a Dutch nuclear research institute has fired up the first experiment on next-generation nuclear reactors based on thorium in nearly half a century.

NRG, a nuclear research facility on the North Sea coast of the Netherlands, has launched the (ORNL slide deck PDF file >> Salt Irradiation Experiment (SALIENT ) in collaboration with the EU Commission. The researchers want to use thorium as a fuel for a molten salt reactor, which is one of the next generation designs for nuclear power. 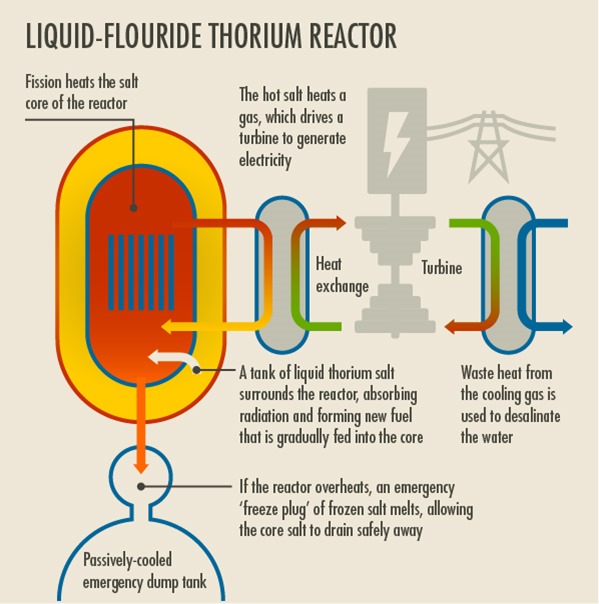 Molten salt reactors are expected to be very well suited for using thorium as a fuel. The unique fluid fuel can incorporate thorium and U-233 fluorides as part of a salt mixture, to melt at very high temperatures.  See briefing How a LFTR Works.

A major challenge for the developers is to produce feasible fuel elements on a repeatable basis.  Down the road the developer will have to be able to find a vendor capable of producing it in commercial quantities. In point of fact, infrastructure for an entire new fuel cycle will have to be designed, clear regulatory and safety reviews, and have enough paying customers to justify investors putting up the money for these facilities.

The Petten team said will melt a sample of thorium salt fuel to see if, over time, the neutron bombardment triggers the nuclear reactions necessary to transmute the thorium into uranium isotopes that can undergo nuclear fission, and sustain the chain reaction needed to generate energy.

If they can produce this cleaner reactor fuel, the next step is to study metal alloys and other materials that can survive the bombardment. Later research will examine how to deal with the waste from a molten salt thorium reactor. While safer than the long-lived products from a standard nuke, these will still need special disposal.

Fluorine as highly reactive which means the metallurgy of plant components must stand up to its demands. An old joke told by graduate school chemists illustrates a point. A professor is working in his lab late one night when he suddenly yells, “eureka,  I’ve found the universal solvent.”  In reply the janitor working the late shift asks in reply, “that’s great professor. What are you going to put it in?”

Thorium has long held promise for “safer” nuclear power. A slightly radioactive element, it converts to fissionable U-233 when hit by high-energy neutrons. But after use, U-233 has fewer long-lived waste products than conventional U-235 now used in nuclear power plants.

Except for one test reactor that has been under construction in India since 2004, the last active research into thorium reactors took place 45 years ago.  India has been a world leader in development of prototype thorium reactor technologies.