Under new the agreement, SNC-Lavalin will provide Holtec with a range of nuclear engineering services, including supporting the licensing of the SMR-160 reactor. While the SMR-160 is based on light water reactor technology, it should be noted that SNC-Lavalin is the parent company of Candu Energy.

According to the Holtec press statement, the partnership aims to accelerate the reactor system’s ongoing development and international licensing efforts by linking SNC-Lavalin’s  nuclear team with Holtec’s SMR team. Under the terms of the agreement, SNC-Lavalin will provide Holtec with a range of nuclear engineering services, including supporting licensing of the SMR-160 reactor.

Unlike its U.S. competitor Nu Scale, which has announced a customer for its 50 MW SMR, to be built and operated in Idaho, Holtec has not said publicly whether it also has a customer order or one in the works. The relationship with SNC Lavalin might develop beyond technical assistance since the firm supplies maintenance services to CANDU type reactors globally.

There are 29 operating CANDU reactors in seven countries; 19 in Canada, 4 in South Korea, and 2 each in China, India, and Romania. among others.  As these reactors reach the end of their service lives, or as demand for electricity grows in these countries, SNC-Lavalin’s existing relationships could be become door openers for the Holtec SMR. However, neither firm has said anything about a joint marketing agreement.

Preston Swafford, SNC-Lavalin chief nuclear officer and executive vice president of nuclear, said: “We know that the global nuclear market for safe, economic nuclear power continues to grow. Partnering with Holtec in the SMR-160 brings us a ‘walk away safe’ reactor design that will deliver a clean, affordable and reliable electricity supply satisfying regional and nation state power needs.”

Holtec CEO and president Kris Singh added: “With SNC-Lavalin’s contribution of a high calibre cadre of experts, Holtec is poised to deliver on our SMR promise, to re-invigorate nuclear power for a world in dire need of a weather-independent and carbon-free source of energy.”

Holtec’s 160 MWe small modular reactor uses low-enriched uranium fuel. The factory-built reactor’s core and all nuclear steam supply system components would be located underground, and the design incorporates a passive cooling system that would be able to operate indefinitely after shutdown. No active components, such as pumps, are needed to run the reactor, which does not need any on-site or off-site power to shut down and to dissipate decay heat.  For complete details see the Holtec Technical Bulletin (PDF file) 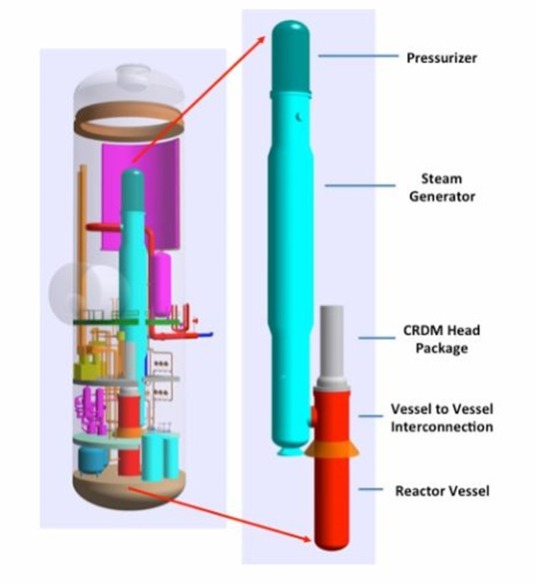 Although Holtec has partnered with a firm that has a core competency on CANDU reactors, the SMR-160 uses low enriched nuclear fuel. According to the company, “SMR-160 uses commonly available nuclear fuel pellets in zircaloy tubes (fuel rods) manufactured by many qualified suppliers around the world.”

Holtec Factory in Camden, NJ, to Manufacture Components for the SMR-160

Holtec International is completing construction of the world’s first dedicated SMR manufacturing facility. The factory, sited on the Delaware River in Camden NJ, has the lifting, cutting, welding, cladding, drilling, machining, inspection, and shipping capacities necessary for all of the SMR-160’s capital nuclear equipment fabrication needs.

This facility, scheduled for commercial operation by the beginning of 2018, is expected to be the first of multiple such facilities, both in the United States and elsewhere globally.

Holtec said it expects to submit its the initial licensing application to the NRC  by the end of 2018.

The firm said on July 13th that the CANBM will “solve first-of-a-kind issues, conduct design for manufacturing analysis, and prototype new component designs.”

Overall, the CANM will support the US nuclear industry’s need to reduce acquisition and total ownership costs by developing innovative manufacturing solutions.

According to Concurrent, the future of nuclear energy will see the emergence of next-generation power plants, commonly referred to as Small Modular Reactors (SMRs) and Advanced Reactors (ARs). It’s projected that hundreds of these SMR/AR systems will be needed by the late 2030s.

The firm said, “a fundamentally different approach” will be needed for SMR/AR systems compared to the current light water reactor systems.

The newer reactors are relatively compact. They can be “factory produced” and transported in a few sections to a designated location for assembly. In addition, these reactors employ passive safety technologies that make them safer to operate.”

This firm’s approach to a “novel” manufacturing approach will challenge both nuclear suppliers and regulators and numerous technical issues must be considered to facilitate efficient SMR/AR production. These range from addressing supply chain capabilities to developing mechanized/automated manufacturing processes to support higher demand volumes.

Gilbert added that the firm was chosen “based on our 30-year history and its track record in advanced manufacturing.”

The firm lists its capabilities as including large infrastructure/highbay space, equipment, testing facilities, and subject matter experts with experience in key technologies including additive manufacturing, casting, and cybersecurity for manufacturing.

To officially launch CANM’s operations, two events will be held for manufacturing companies and suppliers interested in supporting nuclear facilities and upcoming nuclear construction projects, as well as business and community leaders.

A USNIC Ready4Nuclear Nuclear Suppliers Workshop will be held on Wednesday, August 23, 2017, at Sheraton Station Square in Pittsburgh, Pennsylvania. Sessions will be conducted by key speakers representing various components of the nuclear industry geared toward strengthening the nation’s advanced nuclear manufacturing network.

The CANM Open House will be held on Thursday, August 24, 2017, at Concurrent Technologies Corporation in Johnstown, Pennsylvania.

This event will feature a ribbon cutting, tours, and an opportunity for suppliers to meet one-on-one with CTC/CANM personnel to learn how to become part of the advanced manufacturing network.

Registration for both events can be completed online: http://conta.cc/2teWA3p.

Dan Yurman ~ For breaking nuclear news follow me on Twitter @djysrv or https://www.twitter.com/djysrv ~ About this blog and disclaimers for NeutronBytes Blog ~ https://neutronbytes.com/2014/08/31/welcome-post/ ~ Email me: djysrv@gmail.com ~ Mobile via Google Voice 216-369-7194 ~ Header Image Credit: http://apod.nasa.gov/apod/ap110904.html ~ ** Emails sent by readers about blog posts are considered to be comments for publication unless otherwise noted. ** The content of this blog is protected by copyright laws of the U.S. "Fair use" provisions apply. The RSS feed is for personal use only unless otherwise explicitly granted.
View all posts by djysrv →
This entry was posted in Nuclear. Bookmark the permalink.

1 Response to Holtec, SNC-Lavalin, Partner on Development of 160 MW SMR