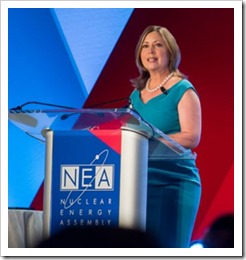 Addressing the Nuclear Energy Assembly for the first time as the head of the industry, the Nuclear Energy Institute’s (NEI) President and Chief Executive Officer Maria Korsnick opened its 64th annual conference in Scottsdale, Arizona, this week by unveiling an initiative to reach out more widely to supporters of nuclear energy.

“To ensure that nuclear energy keeps working for America, the industry has developed a national strategy to communicate nuclear energy’s benefits more aggressively, more widely and more consistently than we ever have before,” Korsnick said.

“We have stepped up our advocacy efforts not just a notch or two, but by a great margin.”

However, in her remarks Korsnick didn’t get into specifics about who would be part of these coalitions or how they would be more effective than NEI’s current advocacy model. For instance, will NEI now work more closely with groups like the Third Way, a DC think tank that has been an advocate for development of advanced nuclear reactors or with the National Conference of State Legislatures which is working to keep nuclear energy in the mix?

Given that Korsnick’s remarks were tailored as a keynote address to a large conference, some details may be forthcoming. In the meantime, expectations for results come with questions.

This new strategy could be a big change for NEI which has for the most part operated as traditional inside the beltway trade group for its members. The organization’s advocacy and public relations efforts have focused on congressional legislation and federal budgets as well as regulatory matters with the NRC.

As a DC based trade group NEI’s public relations operation routinely engages with the big guns of the print and  electronic mainstream media directly and through surrogate organizations like Nuclear Matters.  NEI has a social media operation with presences on the major platforms like Twitter, Facebook, Linkedin, and others .

NEI’s advocacy outside the beltway has sometimes been muted because its member utilities don’t just deal with nuclear energy. For instance, Southern and Scana, which are building new nuclear reactors in Georgia and South Carolina respectively, also have natural gas plants and got into the business with coal-fired boilers.  Dominion, which closed a reactor in Wisconsin, is also a major, multi-state supplier of natural gas to industrial and residential customers.

To be fair, one of the problems nuclear energy has always had is that it isn’t immediately visible to consumers. Most people have no idea where the electricity comes from that lights their homes, heats and cools them, and runs their TVs and all those Internet connected devices.

Another way this could be a big change is that the head of the industry trade group seems to be telling the group’s members that if they want to survive, their days of heads inside turtle shells, and just talking to regulators and public service commissions, need to be a thing of the past.  A lot more talking needs to take place and to people and in places where it hasn’t been done before.

Getting Beyond Public Relations

So what’s a nuclear trade group to do? Here are some friendly suggestions. First and foremost it should move beyond the usual tools of advocacy involving public relations, social media. and talking heads on TV. Maybe it is already doing some of these things, but it never hurts to ask.

If NEI wants to find new ways to be effective as an advocate for the industry, it should consider getting hands-on in terms of creating opportunities for innovation in several key areas. The reason is that to succeed, the nuclear industry must not only have a positive voice relative to the competition, it must also outsmart it in terms of the way it operates.

These ideas (below) go beyond some of the options discussed in the Breakthrough Institute’s excellent recent paper “How to Make Nuclear Innovative.” Assuming NEI has read the paper, and finds it valuable, here are some ideas that take it as a given and offer some additional perspectives.

It should be obvious by now given the work of the Third Way, Breakthrough, and others, that there is a need to develop public/private partnerships with government agencies, labs, private firms, and non-profit R&D centers.

They are the key to building test facilities, offering shared access to advanced computing capabilities, and support for development of advanced materials and new types of nuclear fuels. This includes real commitments of R&D money for national labs, start-up money for entrepreneurs, and outreach to private equity investors once projects reach desirable levels of maturity.

Financing – The ability of utilities to assemble the capital needed to build new nuclear reactors will need more support from federal government load guarantees, perhaps through a nuclear energy investment bank. In terms of boosting investor confidence, this kind of support is going to be essential to overcome the caution lights that are flashing as a result of the Westinghouse bankruptcy.

Project Management – Apply lessons learned from nuclear and other energy related capital infrastructure projects. Get technical and regulatory requirements right before breaking ground. Educate the supply chain about these changes in the way new reactors are built to avoid the kinds of cost over runs and schedule delays that have created king size headaches for Southern and Scana.

Supply Chain Management – Develop a robust program with workshops and resource materials to help firms develop the capability to meet nuclear quality requirements. Firms face a chicken and egg dilemma of not wanting to develop these kinds of production capabilities without orders in hand. If the supply chain isn’t ready when the call goes out for SMRs, foreign firms will fill the gap. Finally, get more suppliers in the middle market involved in nuclear advocacy issues either directly, or though a surrogate group.

On a technical note NEI could step out to help develop  ecosystems of innovation among nuclear suppliers to boost productivity and reliable delivery of components to utilities.  These same principles can be applied within nuclear plants to address operations and maintenance. This would be an entirely new hands-on role for NEI since it would be directly boost the capabilities of the firms in the supply chain to meet the needs of the industry and, of equal importance, to promote exports to global markets.

And Korsnick is already somewhat onboard with some of these ideas. In her remarks she called for a “robust” export program in nuclear technologies and services that would help to support US interests abroad.

“Countries like Russia and China recognize the strategic value of providing nuclear energy technology to other countries. All US policymakers may not yet see the connection between America’s safety and security and its commercial nuclear energy program, but we are changing that.”

She also called on the audience and the industry at large to begin participating in these conversations and to act as advocates on behalf of nuclear energy.