In doing so it will create a test bed on an international scale for advanced reactor designs.

According to a report in the Idaho Falls Post Register for May4, 2017, 18 reactor design groups have expressed interest in using a proposed nuclear reactor test facility at the INL and two of them have indicated they are ready to move their test operations to the site as soon as one of the 12 planned NuScale 50 MW modules is available.

A spokesman for NuScale, which plans to build up to 12 50 MW small modular reactor units at the Idaho site, told the newspaper the first unit for its customer UAMPS, is slated to begin operation in 2026. Last December NuScale submitted their SMR design to the NRC for design certification, which is expected to take three-to-four years to complete. 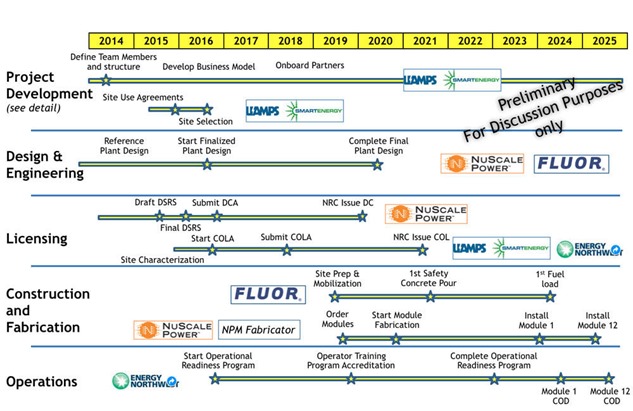 The umbrella concept for the test platform is to use one or possibly two of the 12 units as part of the INL’s joint proposal with NuScale and UAMPS for a “Joint Use Modular Plant.”  The idea is that one or two of the 50 MW units, built after the first unit is in revenue service, would serve as a platform to test different applications of the SMR’s capabilities.

Some of the potential applications that have been discussed being tested including using grids of SMRs to support resilient power for communities so that if one unit is offline, the others keep churning out electricity. With large 1000 MW units, if they go offline, a lot of expensive replacement power has to be obtained right away. If it isn’t available because of demand, brownouts or blackouts can be the result.

Some SMRs might also have as one of their primary purposes providing steam for district heating replacing coal fired units or for desalinization of sea water.

The most intriguing idea is to apply the test SMRs to support development of advanced reactor designs. To that end Terrestrial Energy, a Canadian firm, is reported to be in discussions with the INL to do test work there to develop its molten salt reactor design.

The firm wants to take advantage of the INL’s site with its infrastructure and the fact that environmental reviews for this kind of project were completed for the NuScale project. Having access to the lab’s scientists and engineers is also a big plus.

This kind of work is usually done on a cost-reimbursable basis which means that Terrestrial Energy would have to pay for any costs associated with using the site and having access to a future SMR. To this end Terrestrial Energy has applied for a Department of Energy loan-guarantee.

However, to date the company is still working off of Series A financing packages and has yet to book an investor or a consortium in the $100M or greater range which would be needed to proceed with a prototype.  Nevertheless, the firm has said its time to market for its novel design would be sometime in the 2020s. It announced ambitious plans last January to submit its design to the NRC by 2019.

In July 2016 Transatomic, a developer of an advanced nuclear reactor design, told this blog it also has approached the INL for possible use of test facilities there and to explore the potential to build its first prototype at the site. Transatomic has received a grant from the GAIN program at the INL for work on the specialized fuel that would be needed for its reactor design.

The problem facing both Terrestrial Energy and Transatomic is that new reactor technologies must prove to utilities that they can be operated at a profit within the constraints of existing market realities or they will not be adopted. This requires extensive testing of designs and development of cost estimates that will attract equity investors and customers.

The Idaho test facility, if built, may be able to speed up the process. It will need help from the Department of Energy as will the developers in public / private partnerships to succeed.

A consortium of SMR developers has spelled out the elements of a commercial deployment program needed to stimulate new SMR generation sufficient for self-sustaining deployment. The program should be available through a combination of the following investment mechanisms: (full details here)

The indisputable fact is that the nation’s electrical grid cannot run 100% on renewable energy. Both solar and wind are intermittent, and in order to keep the electrical grid stable, there has to be baseload supply/generation.

So far this stability has been provided by large 1000 MW nuclear reactors, as well as gas and coal fired conventional power plants.

The industry consortium of small modular reactor (SMR) developers and customers has written to Secretary of Energy Rick Perry’to support his request for a departmental study on the nation’s energy security and grid reliability. Their main pitch is that if you want grid stabilty, and CO2 emission free baseload power, SMRs are the way to go. Plus they are a lot cheaper than the the full size reactors.

For instance, at $4,000/KW, a 50 MW SMR would cost only $200M. In a multi-unit facility, like the one planned by NuScale for its customer UAMPS, the revenue from the first unit pays for the second and so on. This means the customer is not in a “bet the company” profile waiting for a 1000 MW unit costing $4 billion to come online.

The challenge for SMR vendors is to get enough orders to shift production from a complex supply chain and one-at-a-time fabrication to a factory production line to achieve economies of scale.

These facts are most likely unknown to the new energy secretary who’s background as a career politician in Texas hasn’t instilled much confidence in the industry, although it won’t say that in public.

So starting with the obvious, the in May 2 letter the SMR Start consortium highlighted the role that nuclear energy plays in securing the nation’s baseload power diversity and grid stability.

“Nuclear energy is reliable baseload power that generates nearly 20 percent of U.S. electricity and is a major reason we benefit from affordable electricity prices today,” the letter said.

Perry’s memo to his staff expressed concerns about the potential erosion of the diversity of critical baseload resources, and asked for a 60-day study into how federal policy interventions may be distorting wholesale electricity markets.

He also asked whether some attributes of baseload power sources that strengthen grid reliability are being adequately valued and compensated in wholesale electricity markets, and the extent to which “market-distorting” federal subsidies may “boost one form of energy at the expense of others.”

This last item is clearly aimed at the need to value the zero carbon emissions profile of the nation’s nuclear fleet. A number of otherwise fully operational nucler reactors have closed due to market conditions that undercut their ability to operate at a profit. They include reactors in Nebraska, Wisconsin, and Vermont, among others.

SMR Start’s letter points out that with regard to nuclear energy, the markets are not fully valuing its unique combination of benefits, including “grid reliability, on-site fuel supply, technology diversity, carbon-free generation and long-term price stability.”

The letter recommends that the U.S. Department of Energy implement policy solutions to “level the playing field” for the deployment of new reactors, as well as to preserve existing nuclear facilities. This means rate structures have to be set up that will provide confidence for investors to put up the money to developa and deploy new SMRs for commercial use.

SMRs, which are expected to begin operating in the mid-2020s, will feature “the ability to better match new generation capacity with electric demand growth, enhance grid reliability through load following in areas with high penetration of intermittent renewables, and the ability to be deployed in diverse applications.”

“Federal support for SMRs will continue to be needed in 2018 and over the next several years in order to bring this technology to market in time to meet future energy demands.”

SMR Start’s policy paper further recommends that DOE and the U.S. Department of Defense establish programs to develop SMR-powered microgrids that can power remote locations independent of the main grid, making them “less vulnerable” to natural phenomena and intentional acts.

TVA Not Bullish on SMRs but Keeps Options Open

The Knoxville News reports on May 2 that while TVA has filed an application for an Early Site Permit (ESP) for a small modular reactor at its Clinch River site, it does not feel the technology nor the utility are ready to move ahead with one.

The quasi-governmental utility also has a problem with debt ceiling that makes it wary of taking on new capital intensive projects with unknown costs.

According to the Knoxville News report, a TVA executive told the newspaper the utility is taking a wait-and-see attitude towards SMRs. He said that the utility has no commitment to build an SMR, but will seriously consider its options once it sees that there is a cost effective design available.

For that to happen, he said, the industry would have to have shifted from one-at-a-time unit by unit construction to the production of whole reactor systems in factories. The design would have “to be self-contained and not need much of the infrastructure of a site built reactor.”

TVA’s doesn’t specify what kind of SMR technology nor a preferred reactor vendor.  NRC spokesman Scott Burnell told the newspaper the agency only requires that the application shows that the site is capable of supporting a “generic set of nuclear power plant characteristics.”

The Linglong One is the first reactor of its kind in the world to have passed the safety review by the IAEA. ( October 2016 IAEA briefing slides PDF file on capabilities and expected uses) 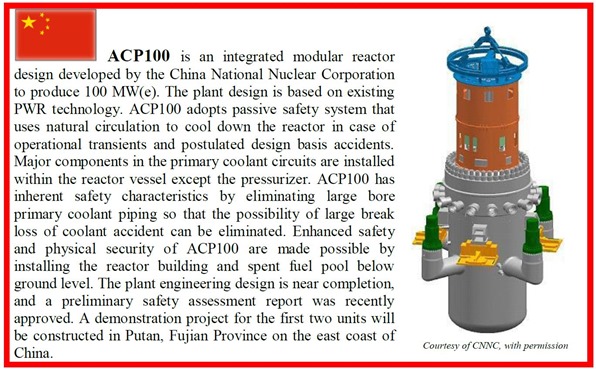 The company said that the ACP100, China’s first small modular reactor (SMR) developed by CNNC for practical use is expected to be built at the end of this year in the Changjiang Li autonomous county of Hainan.

Qian Tianlin, general manager of China Nuclear New Energy Investment, said that small-scale nuclear reactor technology has reached a stage at which it can be used on a pilot basis. It can be used to generate heat for a residential district replacing coal-fired boilers and for grid stability in a mesh network.

Qian said he expects mass production of the small modular reactors after the pilot project in Hainan is up and running, and for the technology to be exported globally.