The Naval Reactors facility needs a new wet storage facility to cool off spent fuel from its nuclear propulsion program.

The Associated Press reported October 3 that the Navy and U.S. Department of Energy want to build a $1.6 billion facility at a nuclear site in eastern Idaho that would handle fuel waste from the nation’s fleet of nuclear-powered warships through at least 2060. (fact sheet)

According to the wire service, the new facility would be built at the Energy Department’s 890-square-mile Idaho National Laboratory, the nation’s primary lab for commercial nuclear energy research.

The Navy’s plan is sure to set off a significant response from anti-nuclear  groups and two ex-governors who have stridently opposed any new spent nuclear fuel, from any source, being brought to the state. 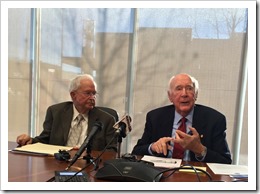 Former Governors Cecil Andrus, a democrat, and Phil Batt, a republican, (left) have maintained that absent significant progress in stabilizing and removing nearly a million gallons of highly radioactive liquid radioactive waste at the Idaho lab, no new spent nuclear fuel can be brought to the site.
(Image: NPR/Boise Public Radio)

Their opposition scuttled a plan by the R&D side of the house at the Idaho lab to conduct evaluations of small quantities of high-burnup fuel from commercial reactors. The project was transferred by the Department of Energy to the Oak Ridge lab.

The latest plan announced by the U.S. Navy could re-energize their opposition and possibly put at risk an unrelated effort to build a first of a kind small modular reactor for commercial generation of electricity at the Idaho lab in the 2023 or later.

The Navy has been bringing spent nuclear fuel from its ships and submarines to Idaho via rail since the early days of the Navy’s nuclear propulsion program. The liquid radioactive waste that is sitting in underground tanks on the Arco desert is residual material from the reprocessing of the naval fuel which took place there until President Carter cancelled the program as a nonproliferation measure.

Some of the facilities at the Naval Reactors site date back to the the Cold War era which is one reason why the government thinks that an upgrade is in order. The State of Idaho, which wants all of the spent fuel gone from the site by 2035, seemed to recognize that business as usual is the more likely scenario. A spokesman for the lab told the the AP;

“We would prefer to see a state-of-the-art facility if they’re going to continue to bring in spent fuel,” said Susan Burke, Idaho National Laboratory oversight coordinator for the state Department of Environmental Quality.

According to the AP report, a document approving the plan could be issued early next month. Officials say site preparation would likely begin in 2017, with the facility becoming operational in the early 2020s.

“The facility would be designed with the flexibility to integrate future identified mission needs,” the environmental impact statement says. It also notes that the new facility would be upgraded to meet new seismic standards.

On October 28, 1983, the Borah Peak earthquake measured 6.9 on the event magnitude scale making it a violent seismic event. Earthquake numbers are logarithmic which means each tick on the right side of the decimal means a 10 fold increase in seismic intensity.

The U.S. Geological Survey notes that the Borah Peak earthquake is the largest ever recorded in Idaho – both in terms of magnitude and in amount of property damage.

The Challis-Mackay region experienced significant damage, with 11 commercial buildings and 39 homes with major damage; while another 200 houses were damaged, minor to moderately.

Mackay in particular, about 50 miles west of the Idaho lab site, experienced the most severe damage. Most of the city’s large buildings on its Main Street were damaged and some had to be demolished.

Another reason that a new building at the Naval Reactors site is needed to handle a new type of spent-fuel shipping container. The container requires a larger pool with a different configuration to place the spent fuel in wet storage until it cools off enough to be moved to dry casks.

The new facility will take spent fuel from ships, move it to wet storage at the Idaho site, and when it is cool enough, place it in dry casks for shipment to an interim storage or permanent geologic disposal site. 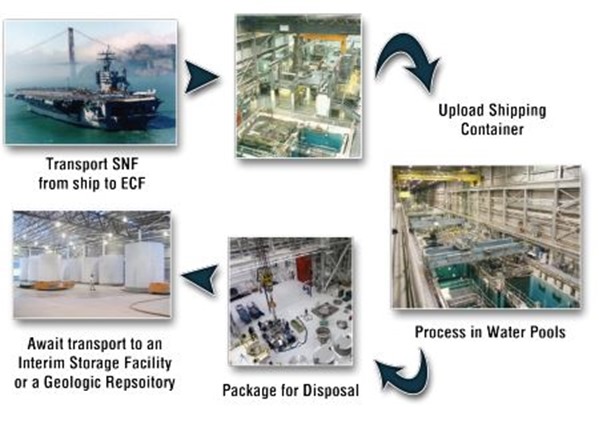 The performance characteristics of naval fuel are classified, but Burke told the AP the time needed to cool the fuel and move it to a dry cask is six years. Once is it moved to a dry cask, the Idaho Settlement Agreement requires it to be taken out of Idaho. Typically, for commercial nuclear spent fuel, that takes about five years to be ready for dry casks

All of the naval spent fuel, old and new, is required to be removed from Idaho by 2035. Currently, with the path to Yucca Mountain shut down, the fuel has no place to go.

The latest developments in the nation’s quest to deal with spent nuclear fuel include two efforts by private firms to develop interim storage sites, one in west Texas and the other in southeastern New Mexico.

It seems, conceptually, possible the U.S. Navy would consider a move of its spent fuel from Idaho to either of these sites. However, given the national security issues associated with the spent fuel, the interim storage site would have to be separated from the one hosting commercial spent fuel.

In a separate development, the Department of Energy has been developing what it calls a “consent based” approach to siting spent fuel facilities.

Shipments of naval spent nuclear fuel to the Idaho site have been the subject of intense political action and response including lawsuits.

AP notes in its news report that the lawsuits culminated in a 1995 agreement, then a 2008 addendum, limiting such shipments and requiring spent fuel, and most solid nuclear waste, to be removed from Idaho by 2035. The deal applies to the Navy’s spent nuclear fuel.

The plan for the new facility is based on an operational timeline that takes it out to 2060. That might require the government to reopen negotiations with the state.  Andrus, in particular, has been outspoken in his comments that he does not trust the  government to keep its promises.

Currently, the prospect of renegotiating the Settlement Agreement  is a non-starter for Andrus and Batt, While it has been several decades since either man has been in elected office, they still swing considerable political weight and a sitting Idaho governor is not going to buck them. Indeed, Idaho Attorney General Lawrence Wasden has lined up with Andrus and Batt saying that no new spent fuel from any source can come to Idaho until there is progress on cleaning up the site.

While DOE and its contractors made progress since 2005 shipping solid radioactive waste material in drums to the WIPP site in New Mexico, that facility has been closed since 2014 due to a fire, and it still has problems. This week two ceiling panels in the underground caverns caved in raising issues about the timing of restart of operations.

DOE is still struggling to successfully operate a $550M treatment facility at the Idaho lab which is designed to convert the liquid radioactive waste into a dry powder form. A new contractor that started work last June says it has a plan to get the plant into gear.

Unlike Los Alamos and Sandia, both located in New Mexico, the Idaho lab does not do R&D work on nuclear weapons nor is it involved in their fabrication or decommissioning. However, it has hosted the Naval Reactors program since 1957. The lab also is home to a U.S. Army facility that manufactures tank armor from depleted uranium tailings recycled from uranium enrichment facilities.

One benefit of construction of the $1.6 billion navy spent fuel plant is that jobs related to that work would directly benefit the region. In 2013 Areva, a French firm, walked away from plans to build a $3 billion uranium enrichment plant on private land on a site located about 18 miles west of Idaho Falls. The company said it could not attract investors despite having been issued a  license for the plant by the NRC and obtained a loan guarantee from DOE for the first $2 billion in costs.

By the early 2020s one thing is sure, DOE will need to have figured out a way to get rid of the liquid radioactive waste that is the subject of the ire of Andrus and Batt. The future of the Navy’s plans, and those of NuScale for its FOAK SMR, depend on it.

Otherwise, the same old disputes will crackle across the Arco desert like the lightning from dry thunderstorms that sets off range fires in the volatile sagebrush on hot summer days.