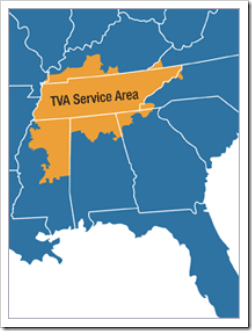 (Times Free Press) The Tennessee Valley was powered this week by a record amount of electricity generated from splitting atoms.

With TVA’s newest nuclear unit at the Watts Bar Nuclear Plant reaching 100 percent power this week, the seven reactors in the TVA fleet accounted for more than 40 percent of TVA’s power generation this week for the first time in TVA’s 83-year history.

TVA is continuing power tests of the new reactor at Watts Bar, which is the first new reactor to be added to America’s electric grid in more than two decades.

TVA must operate the new reactor for 20 consecutive days at full power as part of a test program before it is declared a commercial nuclear unit and is brought into TVA’s rate base.

(Lexology) During its quarterly meeting on September 22, the U.S. Department of Energy’s (DOE’s) Secretary of Energy Advisory Board approved a Draft Report of the Task Force on Nuclear Power.

According to Platts, the report says advanced reactor program would first focus on down-selecting those technologies with the best chance for exceeding light water reactors on cost, safety, and performance; then on construction and operation of test reactors; before finally moving onto the licensing and construction of commercial prototypes.

The government’s cost share (the program assumes private sector involvement) is estimated in the Draft Report to be over $5 billion per reactor technology type, with the government paying most of the costs for the earlier phases.

Although expensive, Lexology notes in its analysis that the Task Force countered that other technologies, such as wind and solar, have benefited significantly from government support, and such support is similarly justified for advanced reactors as long as there is a reasonable chance of success.

For less mature technologies, basically anything not based on light water reactor designs, the report estimates a development time frame to commercial success of as much as 20 years and $8-13 billion in combined government and private sector costs. See Figure 9 below from Pg. 34 of the report. The estimate includes over $5 billion to design and build a first-of-a-kind demonstration plant. 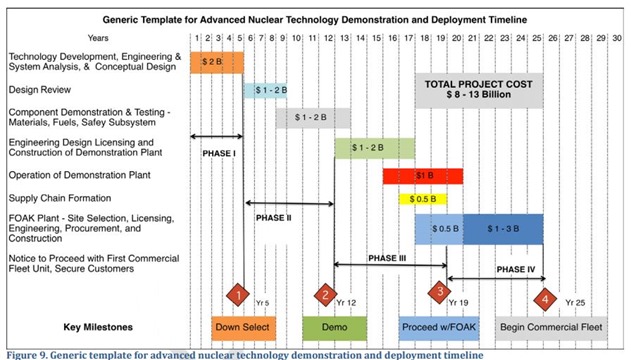 To address the uncertainties of licensing the report supports recent DOE-NRC efforts to establish design criteria for advanced reactors. The Task Force estimated that the best opportunities for time savings and regulatory certainty could come through improving the earlier-end NRC design review process

The Draft Report also suggests that any program to speed the development of advanced reactors allow for greater contracting flexibility in the types of assistance offered, less adherence to the Federal Acquisition Regulations, access to DOE technical expertise, presumably at national labs, and the ability to hire and fire project staff on commercial terms.

(NucNet) Agreements signed in September mean preparations can begin on the Bradwell B nuclear project in England, allowing China General Nuclear Group (CGN) to put its HPR1000, or Hualong One, reactor technology through the UK’s generic design assessment process.

CGN said that in addition to signing all final agreements for the Hinkley Point C project, it also signed agreements related to plans to build two HPR1000 reactors at Bradwell B, in Essex, and two Areva EPR units at Sizewell C in Sussex.

CGN will have a 66.5% interest in Bradwell B with the remainder held by France’s EDF. It will have a have a 20% stake in Sizewell C.

Fangchenggang 3 and 4, under construction in southern China, will be the reference plant for the proposed Bradwell B plant in the UK. Fangchenggang 5 & 6 will be based on the Westinghouse Ap1000 design.

UK regulator prepared for Hualong One

(WNN) The UK’s Office for Nuclear Regulation has the expertise and resources it needs should it receive a request from government to assess China’s Hualong One reactor design, its chief nuclear inspector, Richard Savage told World Nuclear News.

The Hinkley Point C and Sizewell C plants will be based on France’s EPR reactor technology, while the new plant at Bradwell will feature the Hualong One design.

As part of that agreement, CGN agreed to form a joint venture company with EDF Energy to seek regulatory approval for a UK version of the Hualong One design. Hualong International Nuclear Power Technology – the joint venture between CGN and China National Nuclear Corporation (CNNC) to promote the Hualong One reactor design in export markets – was officially inaugurated in March.

(NucNet) Due to their smaller size and easier siting small modular reactors (SMRs) offer flexibility and could deliver low-carbon heat into cities via hot water pipelines up to 30km in length, according to a new report by the Energy Technologies Institute (ETI).

The report says this flexibility opens up new potential sites and could help to decarbonise energy use in buildings. Consideration should be given to the concept of deploying SMRs as “CHP [combined heat and power] ready”, even if there is no firm local demand for district heating systems at the time of SMR deployment.

This is because the additional costs are small and the potential future revenues large, bringing benefits to both consumers and SMR operators, the report says.

Small modular reactors (SMRs) could be operating in the UK by 2030 if action is taken to create investor confidence through development of a suitable policy framework, according to a new report by the Energy Technologies Institute (ETI).

The report  “Preparing for Deployment of a UK Small Modular Reactor by 2030” examines the steps that will need to be taken by government, regulators, reactor vendors and operators in a “credible integrated schedule” that would see construction of a first-of-a-kind reactor starting in 2025 with the reactor itself in operation by 2030.

Enabling roles the government would need to undertake would include promoting early engagement with vendors, enhancing the confidence of private sector investors, and taking steps to limit uncertainty in the investment case.

Report author Mike Middleton said the ETI’s analysis shows that it is possible for the UK to have a first-of-a-kind SMR in operation by 2030 if developers, government and regulators work together in an integrated program.

The ETI is a public-private partnership between global energy and engineering companies and the UK government. The report is online: http://bit.ly/2dbY6L9

(Reuters) South African Energy Minister Tina Joemat-Petterson announced this week that the government will delay tendering for new nuclear power stations, perhaps indefinitely, after requests for consultation and discussion made it impossible to start the process by the end of September as initially planned.

Court action by interveners opposed to the project played a role in the decision to postpone release of the tender. They claim the Integrated Resource Plan, being used to justify the procurement and completed in 2010, is out of date among other things. If the court rules in their favor, the entire plan will have to be redone which could take a year or longer. It would need to update information on power demand, the economy, and energy technologies.

South Africa has committed itself nuclear expansion as a key part of increasing its power generation but the price tag for 9.6 GWe of nuclear reactors has raised concerns over whether the plan is affordable. Eskom, the state owned utility, which would buy the power from the reactors, has been hobbled in its effort to pay for new power plant construction and related grid infrastructure by government restrictions on rate increases.

Shortly after the announcement postponing release of the nuclear energy tender, Minister Joemat-Petterson said she remained “fully committed” to plans for nuclear procurement.

Allegations of favoritism have also clouded prospects for resolution of conflicts over the procurement decision. The Mail & Guardian reported that a company trading as Empire Technology was awarded a large contract for the procurement of the nuclear build program management system. It noted that the company’s sole director is Shantan Reddy, the son of Vivian Reddy, a long time associate of South Africa President Zuma.

The legitimacy of the procurement process has been called into question since President Zuma announced in 2014 that Rosatom would provide financing for and build the reactors. Later, the Department of Energy said there would be a fair and open tender process, but few believe this will be the case with the latest revelation.

(Power) In a move long expected to take place, the Japanese government has killed the troubled Monju fast breeder reactor project. However, it also made promise to pursue breeder reactor technology as a component of the nation’s future power mix. The commitment may be difficult to keep.

The Monju plant was an ambitious project that never met expectations. Since startup in 1980 the sodium-cooled fast-breeder had only 250 days of operation over its lifetime.

A sodium coolant fire in 1995 and subsequent cover-up by operator Japan Atomic Energy Agency (JAEA) gave the plant a very big black eye. An attempt at a restart in 2010 led to a finding that JAEA had skipped required safety inspections on as many as 10,000 of the plant’s components.

In a tooth-rattling report last year, Japan’s Nuclear Regulation Authority ruled that JAEA was not qualified to safely operate the plant and ordered the federal government to find a replacement or shut the facility down. The government has chosen to walk away from its $10 billion investment. It will likely spend billions more decommissioning the plant.

Power Mag reports that at the same cabinet meeting, the government said it was still committed to pursuing breeder reactors as a possible solution to the nation’s energy needs.

Fast-breeder reactors, which generate plutonium, could help solve this problem. They have been deeply controversial because of the required fuel processing and fears about nuclear proliferation.

It appears that despite closing the Monju reactor, and huge problems restarting its nuclear fleet in the post-Fukushima era, that the country’s government and closely aligned business interests still want to pursue the fabled “plutonium economy.”

According to Japanese media, the government pledged to pursue plans for new demonstration breeder reactors, with a roadmap developed by the end of the year.

(Nikkei Asian Review) TOKYO — Japan’s Hitachi, Toshiba and Mitsubishi Heavy Industries aim to merge their nuclear fuel units to gain an edge on cost in an effort to better compete with Chinese and South Korean rivals.

Amid bleak prospects for getting current domestic reactors up and running, let alone building new ones, the next challenge will be to consolidate their nuclear reactor businesses.

The government plans to generate 20-22% of the county’s overall power mix from nuclear power plants by 2030, but many market watchers remain skeptical.

Dan Yurman ~ For breaking nuclear news follow me on Twitter @djysrv or https://www.twitter.com/djysrv ~ About this blog and disclaimers for NeutronBytes Blog ~ https://neutronbytes.com/2014/08/31/welcome-post/ ~ Email me: neutronbytes@gmail.com ~ Mobile via Google Voice 216-369-7194 ~ Header Image Credit: http://apod.nasa.gov/apod/ap110904.html ~ ** Emails sent by readers about blog posts are considered to be comments for publication unless otherwise noted. ** The content of this blog is protected by copyright laws of the U.S. "Fair use" provisions apply. The RSS feed is for personal use only unless otherwise explicitly granted.
View all posts by djysrv →
This entry was posted in Nuclear. Bookmark the permalink.