The Montreal, Canada, based engineering and construction giant SNC-Lavalin, which five years ago, bought AECL’s reactor division from the government, has a new joint venture with China National Nuclear Corp. (CNNC) and Shanghai Electric Co.

The immediate results of the agreement will be the creation of two nuclear reactor design centers, one in China and the other in Canada. The design centers will collaborate to complete the Advanced Fuel CANDU Reactor (AFCR). It is expected that the first two units will be then built in China and then the reactor will offered via export to global markets.

In a press release, SNC-Lavalin said;

“’The market potential for AFCR technology in China is considerable. Each AFCR can use recycled-fuel from four light-water reactors (LWRs) to generate six million megawatt-hours (MWh) of additional carbon-free electricity without needing any new natural uranium fuel.

This would be enough new electricity to power four million Chinese homes, and also displace six million tonnes of carbon emissions per year vs. coal, the equivalent of removing one million cars from the road. China has more than 33 LWR nuclear power reactors in operation and another 23 LWRs under construction.”

The agreement occurred during an official four-day visit to Canada by Chinese Premier Li Keqiang. Canadian PM Justin Trudeau promoted the visit as a thaw in relations between the two nations following a decade of chilly diplomacy under the Conservative government of PM Stephen Harper.

According to news coverage in the Toronto Globe & Mail for 9/22/16, John Luxat, a professor of nuclear safety analysis at McMaster University, told the newspaper the new reactor technology has “high potential for use in China because of the large number of light water reactors” who spent fuel could be used by CANDU designs.

However, AltgaCorp investment analyst Chris Murray told the newspaper he sees the design and marketing effort to be a slow, drawn out effort and does not expect there to be any near-term financial impact.

CANDU stands for CANada Deuterium Uranium, because it was invented in Canada, uses deuterium oxide (also known as heavy water) as a moderator, and uranium as a fuel. 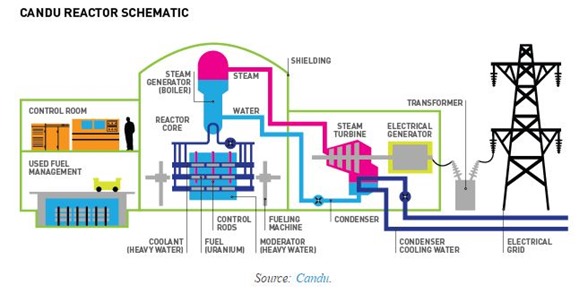 CANDU reactors can be refueled while operating at full power, while other light water designs, including PWRs and BWRs, must be shut down for refueling. Moreover, because natural uranium does not require enrichment, fuel costs for CANDU reactors are very low.

Canada is one of the world’s leading sources of uranium with rich deposits in Saskatchewan and other provinces. It has no uranium enrichment capabilities.

The safety systems of CANDU reactors are independent from the rest of the plant, and each key safety component has three backups. This redundancy increase the overall safety of the system, and it also makes it possible to test the safety system while the reactor is operating under full power.

There are 19 CANDU reactors in Canada and 31 globally including two in China, two in Argentina, and two in Romania. While all three countries are potential markets for the new SNC-Lavalin / CNNC design, only China has committed, in principle to building the new ACFR.

It is unclear to what extent the new AFCR benefits from a design heritage with the now suspended work on the ACR-1000 which was proposed in 2007 and 2008 for Canadian and UK power markets.

The ACR-1000, a 1200 MW CANDU type reactor design, was proposed to be built in the tar sands region of Alberta for power and process heat customers and at Point Lepreau in New Brunswick for electric power customers. Neither projects ever made it off the drawing boards.

Efforts to license the 1200 MW unit with the Canadian Nuclear Safety Commission ended in Spring 2008 when AECL also withdrew the design from consideration in the UK generic design assessment.

AECL CEO Hugh MacDiarmid was quoted at the time as saying, “We believe very strongly that our best course of action to ensure the ACR-1000 is successful in the global market place is to focus first and foremost on establishing it here at home.”

But there were no sales at home due to Bruce Power declining to consider the 1200 MW reactor.

In June 2011 SANC-Lavalin bought the reactor division of AECL for the bargain basement price of $15 million which included all of AECL’s intellectual property related to CANDU reactor designs.

The advanced CANDU reactor (ACR), in its current design status, frozen in 2008, is a Generation III+ nuclear reactor design and is a further development of existing CANDU reactors designed by Atomic Energy of Canada Limited (AECL).

The difference between heritage CANDUs and the ACR is that it uses low enriched uranium (LEU) fuel, (3-5% U235), ordinary (light) water coolant, and a separate heavy water moderator.

The ACR also incorporates characteristics of the CANDU design, including on-power refueling with the CANFLEX fuel; two fast, totally independent, safety shutdown systems; and an emergency core cooling system. The relatively small reactor core reduces core size by half for the same power output over the older CANDU design.

The ACR fuel bundle is a variant of the 43-element CANFLEX design (CANFLEX-ACR). The use of LEU fuel would result in higher burn-up operation than traditional CANDU designs.

None of these features were found to be compelling by potential customers and AECL shelved the entire effort to develop the ACR.

About the New AFCR

According to SNC_Lavalin the Advanced Fuel CANDU reactor (AFCR) (fact sheet) is a 700MW Class Generation III reactor based on the successful CANDU 6 and Enhanced CANDU 6 (EC6) reactors with a number of adaptations to meet the latest Canadian and international standards. This is 300 MW less in power than the ACR and also differs technically from the ACR in that it uses only heavy water as a moderator.

Image of ACFR courtesy of SNC-Lavalin

Its fuel flexibility allows it to use recycled uranium or thorium as fuel. SNC-Lavalin calls such materials “natural uranium equivalent” fuels, It uses a heavy water moderator and heavy-water coolant in a pressure tube design. CANDU reactors can be refuelled on power. The firm claims it will have “one of the highest lifetime capacity factors among the world’s reactors.”

The development of the AFCR was first reported by World Nuclear News in November 2014. That report also provided insights into the place in China’s nuclear fuel cycle that would be the niche for the reactor.

WNN noted in its report that the used fuel from four conventional PWR reactors can completely supply one AFCR unit (as well as providing recycled plutonium for MOX). This process significantly reduces the task of managing used fuel and disposing of high-level wastes. The R&D effort also explored the use of thorium as a fuel for the new reactor.

History of CANDU in China

In June 1998, construction started on a CANDU 6 reactor in Qinshan China of the Qinshan Nuclear Power Plant, as Phase III (units 4 and 5) of the planned 11 unit facility. Commercial operation began in December 2002 and July 2003, respectively. These are the first heavy water reactors in China.

In 2015 China signed agreements in principle with Romania and Argentina to supply CANDU reactors.

In a World Nuclear News report in November 2015 report details were revealed that   China and Argentina had in 2014 signed a new high-level agreement towards construction of a third CANDU type pressurized heavy water reactor (PHWR) at the Atucha plant in Argentina.

Under the agreement, CNNC will be providing goods and services and long-term financing. The utility in Argentina will be designer, architect-engineer, builder and operator of the new PHWR (Atucha 3).

Under the agreement, over 70% of the components to be used in the plant will be supplied by Argentine companies. CNNC is now expected to advance the negotiations with Chinese financial institutions to conclude project financing.

Atucha 3 will be a part Canadian-developed Candu reactor running on natural uranium fuel, like the 648 MWe Embalse Candu reactor in Córdoba province.

Because of the localization strategy for major components, and the history of the supply chain in Argentina with the other CANDU reactors, it is unlikely that Atucha 3 could be based on the new AFCR design.

Atucha 3 is expected to cost almost $6 billion and to take eight years to build at the Atucha Nuclear Power Plant Complex in Buenos Aires province, where the 335 MWe Atucha I and 745 MWe Atucha 2 currently operate.

Also in November 2015 World Nuclear News reported Romania’s Nuclearelectrica signed a memorandum of understanding (MOU) with China General Nuclear (CGN) for the development, construction, operation and decommissioning of units 3 and 4 of the Cernavoda nuclear power plant.

The Romanian national nuclear company said a joint venture project company is to be established, with CGN owning at least 51% of the share capital.

That company will oversee construction of the units, which will be 700 MWe Candu 6 reactors. Two Candu units already operate at the Cernavoda site.

Romania and China signed a letter of intent in November 2013 during a visit to Bucharest by Chinese premier Li Keqiang.

Cernavoda is home to two operating Candu 6 pressurized heavy water reactors (PHWRs) supplied by Candu Energy’s predecessor, Atomic Energy of Canada Ltd (AECL), and built by a Canadian-Italian consortium of AECL and Ansaldo. Unit 1 started up in 1996, but work was suspended on a further four units in 1991. Unit 2 was subsequently completed and has been in operation since 2007.

Given Romania’s history with CANDU reactors, and its intent to apply its operating experience with them to Units 3 & 4, it is unlikely that country would be a market for the new AFCR model. Romania will supply the fuel for all four reactors.

According to the same World Nuclear News report, the new conventional CANDU units will have an operating life of 30 years with the possibility of extension by an additional 25 years.

Future Markets for the AFCR?

With Argentina and Romania committed to conventional CANDU, off-the-shelf, technology, it is unclear what the commercial prospects will be for the new AFCR CANDU design. The design intent to use spent nuclear fuel in the reactor would make it attractive to many countries.

China will build and operate the first two units to prove to potential customers that the design is safe, affordable, and will have a long and cost-competitive service life.

Assuming the units can be built in China for $3,000 to $4,000 per Kw, a 700 MW unit will cost approximately $2.1 billion to $2.8 billion which is far less than the cost in the U.S. for a 1000 MW Westinghouse AP1000. Similar cost comparisons would be expected for new nuclear reactors in the UK. However, China is proposing its new PWR design, the Hualong One, for the UK market.

Once China has proven the technical and financial viability of the AFCR  CANDU, it will face the uncertain prospects of design safety reviews for first-of-a-kind units by nuclear regulatory agencies in countries where it wants to sell the reactors. By leveraging the well-known CANDU technology, SNC-Lavalin and CNNC are placing a bet that they will find willing buyers of their new nuclear reactor.