Awareness of nuclear energy’s leading role in preventing greenhouse gas emissions in the electric sector solidifies the conviction among an overwhelming majority of Americans that the technology is important to the nation’s energy and environmental future, a new national survey released 10/1/15 shows.

“The impact of knowing the facts about nuclear energy’s clean air role is eye-opening,” said Ann Bisconti, president of Bisconti Research Inc., which conducted the survey for the Nuclear Energy Institute.

“Once they are made aware of the magnitude of nuclear energy’s impact in the low-carbon electricity mix, Americans’ belief in nuclear energy’s future value is almost universal and crosses gender and political party.”

Similarly reflecting the value Americans place on the environment, 83 percent of those surveyed say “we should take advantage of all low-carbon energy sources, including nuclear, hydro and renewable energy, to produce the electricity we need while limiting greenhouse gas emissions.”

Americans see nuclear reactors as good neighbors. Contrary to the widespread so-called “not in my backyard” or NIMBY phenomenon, a clear majority would accept a new nuclear reactors in their community. This looks like good news for Small Modular Reactors (SMRs). 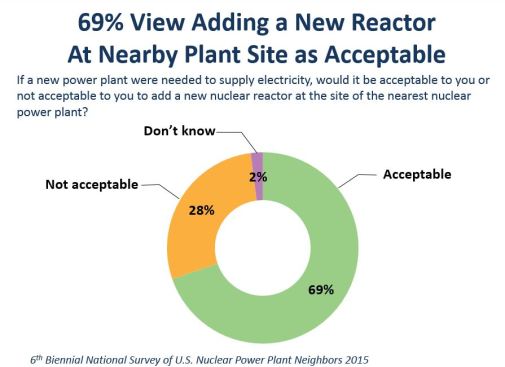 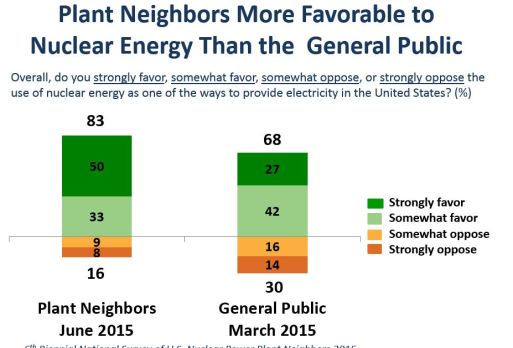 Even when nuclear energy’s clean air value is not detailed, a large majority of Americans favors its use, the survey shows. Sixty-four percent of those surveyed said they favor nuclear energy, including 26 percent who “strongly favor” it. That is down slightly from the 68 percent favoring the technology in Bisconti’s survey last spring.

“In 1983, when the NEI public opinion tracking program began, the public was much more divided, with half favoring and half opposing the use of nuclear energy. Favorability to nuclear energy has remained in the mid- to upper-60s for most of the past decade,” Bisconti said.

The survey also found (before information was given about the magnitude of nuclear energy’s role in the carbon-free energy mix):

Bisconti Research conducted the survey with Quest Global Research from Aug. 30 to Sept. 16. The survey’s margin of error is plus or minus three percentage points.