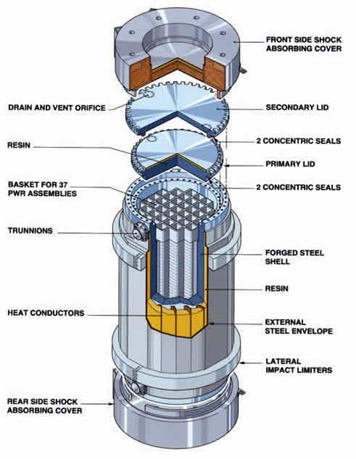 For years spent nuclear fuel has been pilloried as a “waste” on the assumption that once it has been used, it is done, once and forever. The only thing left to do is to find someplace safe to dispose of it. That “place” was going to be Yucca Mountain in Nevada.

But US Senator Harry Reid (D-NV) made a deal in 2008 with then candidate Barack Obama. In return for delivering Nevada’s votes for Obama’s race to the white house, once in office, now President Obama would not pursue an license to open the site.

Obama kept his promise unceremoniously booting out then NRC Chairman Dale Klein, an experienced and apolitical technocrat, and installing Gregory Jaczko, a political aide to Senator Reid who had no nuclear industry experience.

Meanwhile, the Department of Energy paid out tens of millions in penalties to US nuclear utilities for not taking the spent fuel off their hands which was promised to them on the assumption that Yucca Mountain would be complete.  So, all that spent fuel, some 70,000 tonnes of it, is still sitting at the nation’s 104 nuclear reactors waiting for a new home.

Two nuclear industry firms have strong ideas about making money by creating interim storage sites in the remote desert southwest. Both sites are sparsely populated, bone dry, and seismically stable. Local support is strong for both sites, which are within spitting distance of each other, more or less being 54 miles apart.

One proposal, by Holtec, which manufactures the dry casks used to store spent nuclear fuel, has the goal of creating consolidated interim storage facility (CISF) at a 1,000 acre site located between Hobbs and Carsbad, NM. (Holtec briefing)

The other proposal, by French nuclear energy giant Areva, in partnership with NAC International, are seeking to develop a CISF in Andrews, TX, as part of a 14,000 acre LLW disposal site operated by Waste Control Specialists (WCS). The firm is also a participant in the second proposal. (Areva briefing)

Licenses to be sought from the NRC

Both firms have sent “Part 72” letters of intent to the US Nuclear Regulatory Commission (NRC) to seek to comply with the licensing requirements for independent storage of used nuclear fuel, high-level radioactive waste, and reactor-related greater than Class C waste.  Both firms will schedule pre-application meetings with the NRC and plan to submit their license applications for a safety evaluation report (SER) in 2016. If all goes well, both firms say to their investors, licenses could be issued by 2019 with construction to begin thereafter.

The NRC does not choose one or the other applicant for a license. Both firms could get licenses and compete for business from the nation’s nuclear utilities. The competitive issue might arise if there turns out not to be enough investor interest for two facilities. That’s a fence splitter in terms of making a prediction since the lure of 70,000 tonnes of spent fuel being stored in a CSIF over a period of 50-100 years would produce a lot of very predictable revenue.

Reactor sites with spent fuel already in dry storage would be first in line, so to speak, for using either service. Early customers for either CISF could be the dozen or so sites where nuclear reactors have already been decommissioned such as Maine Yankee. More recently, four nuclear reactors are now entering the decommissioning phase of their life cycle. Two are in California, one is in Wisconsin, and one is in Vermont.  Transportation to either site would be by rail.

Storage at the sites could be for 50-100 years depending on several factors. These include whether a future president decides, after the retirement of Sen. Reid in 2016, to try to reopen Yucca mountain.

West Texas and eastern New Mexico is a hotbed of nuclear activities which may explain why yet another facility for the industry will do well there.

On the New Mexico side in the southeast corner of the state is the home for Urenco’s 4.5 million SWU/year uranium enrichment plant, licensed for 6M. If investors can be persuaded to show up, a uranium deconversion plant is still planned for Hobbs, NM. Construction of the $125 million facility was put on hold in 2013. New Mexico is also home to two DOE national laboratories – Los Alamos and Sandia.

Also, the currently and indefinitely closed DOE Waste Isolation Pilot Plant (WIPP) may one day reopen to receive LLW and RH-TRU radioactive waste to be buried in its underground salt caverns.

On the Texas side, the state government has provided support by approval of regulatory agencies for the site to accept LLW from other states. The local governments in west Texas have unanimously approved resolutions of support.

Both consortiums in press releases promote their relative advantages. Both groups have expertise in manufacturing dry casks and in managing the process of moving spent fuel from wet to dry storage. Both groups are now seeking legislation from Congress that would streamline the process of licensing a CISF to be operated by private sector firms.

Another possibility, more remote, is that the DOE might finally officially acknowledge the energy potential locked up in the spent fuel and build a pilot spent fuel reprocessing facility. Unlike permanent disposal at Yucca Mountain, spent fuel in dry casks at a surface site can be retrieved for use in a reprocessing plant. Since DOE would retain title to the spent fuel stored at either site, the US government would have to be a party to a decision to develop a reprocessing plant, which is a major policy hurdle for now.

Meanwhile, Areva is in commercial negotiations to build a $15 billion full throttle spent fuel reprocessing plant for China.  Once built, and if successfully operated, the “inventory” for a similar facility in the US would be waiting for it on the harsh desert landscapes of west Texas and eastern New Mexico.

Dan Yurman ~ For breaking nuclear news follow me on Twitter @djysrv or https://www.twitter.com/djysrv ~ About this blog and disclaimers for NeutronBytes Blog ~ https://neutronbytes.com/2014/08/31/welcome-post/ ~ Email me: neutronbytes [at] gmail [dot] com ~ Mobile via Google Voice 216-369-7194 ~ I am NOT active on Facebook, Reddit or Instagram. Attempt no landings there. Header Image Credit: http://apod.nasa.gov/apod/ap110904.html ~ ** Emails sent by readers about blog posts are considered to be comments for publication unless otherwise noted. ** The content of this blog is protected by copyright laws of the U.S. "Fair use" provisions apply. The RSS feed is for personal use only unless otherwise explicitly granted.
View all posts by djysrv →
This entry was posted in Nuclear. Bookmark the permalink.
%d bloggers like this: