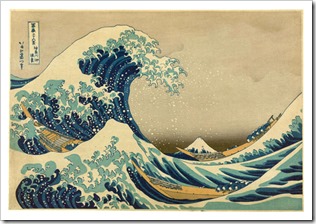 This famous Japanese color woodblock entitled “The Great Wave off Kanagawa,” by Katsushika Hokusai (1760-1849), depicts a large tsunami wave with Mt. Fuji in the background. Credit: Library of Congress

In the vast majority of cases, the role of being a senior executive at a nuclear utility is one that richly rewards the person who shoulders the enormous responsibilities which come with the position.

This is why this month that reports of double dealing, corruption, and malfeasance come as both a shock and as a warning that no industry, however rigorous the requirements for operation of its technologies, is immune from waves of human weaknesses including deception, greed, and failure of nerve.

Japanese prosecutors said this week they would reverse prior decisions not to prosecute three former executives of TEPCO, the owner and operator of the Fukushima nuclear power station destroyed by the combination of a major earthquake and subsequent tsunami in March 2011. The three executives facing charges of malfeasance include;

The case was brought forward by a citizens panel empowered under Japanese law which eventually required the Tokyo District prosecutors to take action.

The case rests on criminal charges that the executives failed to provide sufficient protection of the facility against natural hazards, including earthquake and tsunami, through improvements to the sea wall and relocation of critical plant infrastructure from sea side of the plant to higher ground behind it.

The New York Times reported 8/1/15 that Nobuo Goharqa, a former prosecutor, said that proving the charges will be difficult. He said that the prosecutors bringing the case would have to prove that the executives would have known that a record high tsunami could cripple the plant resulting in the meltdown of two of the reactors and permanently taking the others offline.

TEPCO had no comment for the news media on the case.

The plan by Finland’s Fennovoima nuclear utility to include a mysterious investor from Croatia in its plans for a new new reactor, to be built at Pyhajoki, has been rejected by the government. The utility had planned to use equity from the firm to put it over the top in terms of European firms having a 60% equity stake in the reactor which will be supplied and built by Roastom. The Russian firm would hold a 34% equity stake in the project.

Finland’s economics minister said in mid-July that it could not verify that a Croatian firm, Migrit Solarna Energija, which proposed to take an equity stake, worth $175 million, in the project, was a western European company. Evidence of the ownership of the firm, as reported by Politico, indicates it has its capital coming from Russian investors. If true this would make it a front for Rosatom and violate the 60% rule set by the Finnish government.

Without 60% of the funding coming from verified western European sources, the government will not allow the project to move forward.  Olli Rehn, the Minister of Economic Affairs, told the Helsinki Times that a due diligence review of the firm by the accounting firm of Ernst & Young, turned up the issue of ownership of the firm

Herkko Plit, a senior official with Finland’s economic ministry, told the Financial Times that his agency’s investigation shows the firm has numerous investors, but the people who founded the firm are Russian.

“The current owners are Russian citizens to the best of our knowledge,” he said.

This isn’t the first time the plant has been a magnet for controversy The previous economic minister, Jukka Laaksonen, signed off on Rosatom’s role in the project and then went to work for the Russian firm to gain funding and government approval for it.

Federal police in Brazil have arrested Othon Luiz Pinheiro da Silva, CEO of Elecrtrobas Termonuclear, which is building the country’s third nuclear reactor, Angra 3, on charges he took bribes from construction firms involved in the project. The investigation into the bribes got its start in an unrelated investigation into a money laundering scheme.

The case has had widespread repercussion’s in Brazil. Approval ratings for Brazilian President Dilma Rousseff, dropped quickly with one poll showing that 60% of respondents wanted her impeached for the latest energy related scandal that has also engulfed the nation’s oil& gas sector.

Standard & Poors said the arrest of the nuclear chief was another “political uncertainty” that caused the rating agency to change Brazil’s credit outlook to negative.  US investors have sued Electrobas for failing to disclose the arrest of the company’s CEO in April. Bond yields for the firm, reflecting the higher risks associated with the compnay’s CEO being caught up in a bribery case, rose to 8% by late July.

Elecrobas has denied any wrong doing and put the CEO on a leave of absence.