Just when you thought Yucca was dead, more trouble

The NRC’s latest volume of a multi-volume safety evaluation report for Yucca Mountain contains two surprises neither of which will make the Department of Energy very happy. First, the report says the agency, which sited the project on public lands, doesn’t have the complete jurisdiction or water rights to operate the site. 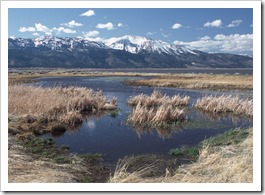 The NRC report notes that there are other actors in the area including firms that have mining rights and there are roads, power lines, and what federal land managers call “rights-of-way.” In effect, what the NRC is saying is that while the wide open spaces of the Nevada desert look like not so much as a horned lizard can be seen from horizon to horizon, in fact, the area is a busy place.

This means that if you plan to build a rail head across the desert, and move 80,000 or so tons of spent fuel to a site in the middle of it, you’re going to have to deal with a lot of neighbors. Plus, you will need to move people, supplies, and equipment on roads through the area. And the people will need water.  Some of that water belongs to others which means DOE will have to buy out those rights assuming the owners want to sell or that the State of Nevada would let them.

The issue of DOE not having “jurisdiction” for the site is more or less the result of Congress not processing the legislation for a “land withdrawal” of the site. BLM lands are de facto authorized for “multiple uses”, such a mining and grazing, and as long as they continue, without a land withdrawal action, the site isn’t solely under DOE’s control. As for water rights, the State of Nevada made sure that DOE could not acquire them.

The long journey to complete the SER started in 2008, but work on it ground to a halt in 2009 after Sen. Harry Reid prevailed on his former aide Gregory Jaczko, now ensconced as the NRC Chairman, to stop reviewing DOE’s license application. Lawsuits followed and the U.S. Court of Appeals ruled in August 2013 that the NRC had acted illegally in stopping the SER.

Work restarted under the tenure of newly appointed Chairman Allison Macfarlane who took office just weeks before the court handed down its ruling. Readers interested in past and future volumes of the SER are referred to the NRC web page on the DOE license.

Sen. Reid reads NRC’s SER and finds he likes it

In an odd twist of political spin, U.S. Senator Harry Reid finds that he likes what he reads on an NRC report about Yucca Mountain.  In fact, like a 19th century Indian chief counting coup on the corpses of his enemies, Reid says Yucca mountain will never open due to the problems of land jurisdiction and water rights documented in Volume 4 of the NRC’s SER.

In a press release Reid said;

“The latest study released by the NRC acknowledges one of the major weaknesses of the effort to resurrect Yucca Mountain: the federal government does not have the water it needs nor control of the land necessary to build a nuclear waste dump in Nevada.

“The State of Nevada long ago refused to grant the federal government water rights necessary for the Yucca Mountain project.  Additionally, a federal Court blocked the Bush Administration’s Energy Department’s efforts to do an “end-run” to force Nevada to turn the state’s water over to the federal government over its strong objections.

“This is just one reason why the Yucca Mountain project will never be built and Congress should instead focus on consent-based solutions that don’t shove nuclear waste down a community’s throat over the objections of its people.”

Reid also has cards to play at the NRC at least  in the near-term The current chairman, Allison Macfarlane, has announced she will step down January 1, 2015, and return to academia.

Former NRC General Counsel and now NRC Commissi0n member Stephen Burns (left) is expected to be named to replace her. Burns earned “yes” votes from both of Nevada’s senators for his confirmation vote suggesting they believe he will not allow the project to move forward.

What’s interesting about the vote  is that 40 republicans voted “no” raising indicating strong opposition across the aisle to a nominee warmly endorsed by Sen. Reid. It should be noted that this outcome isn’t particularly about Burns. The same approximate vote would likely have occurred for anyone offered up by Reid for the job.   Update 12/24/14: President Obama named Stephen Burns to be the NRC Chairman  (NRC press release).

Reid’s influence over all things Yucca may be on the decline. He will be out of the job as majority leader when the new congress convenes in January. Also, some senators, including Lamar Alexander (R-TN), are reported to be interested in solving the spent fuel issue.

Finally, advancing in years, it’s a question whether he will run for re-election in 2016. But for now he’s still a mounted knight with a silver tipped spear seeking to slay the dragon that he believes threatens his desert kingdom.

One thing Ameren was expecting that it won’t get for Christmas is a 20-year license extension for its Callaway nuclear reactor located near St. Louis, MO. Early in December the NRC told the utility its decision on the application for a license extension was put on hold, perhaps indefinitely, due to a petition over spent nuclear fuel issues from the Missouri Coalition for the Environment (MCE). It requested an intervention in the licensing proceedings.

According to a statement on MCE’s website, on December 8th, 2014, the group filed a new challenge with NRC. The reason is Callaway would be get its license extension under the NRC’s new waste confidence rule which says spent fuel can be safely stored at reactor sites.

MCE notes that it is part of a larger legal challenge, which includes NY, VT, and CT, filed in the US Court of Appeals regarding the NRC’s new “Continued Storage of Spent Nuclear Fuel” rule which became effective in October of this year. It is generally known as the ‘Waste Confidence” decision.

MCE is requesting the NRC freeze the licensing decision for the Callaway reactor until the US Court of Appeals has decided whether the rule is determined to be legal under the National Environmental Policy Act.

An NRC spokesman told Missouri wire services that Callaway’s license decision will be on hold while the agency works through the process of responded to the intervention. This could involve an administrative hearing at the NRC or other agency actions.

The agency pointed out that, contrary to some comments, it isn’t spooked over the first protest to the waste confidence decision.

The NRC said in a somewhat business-as-usual manner that public contentions over license decision are not unusual. However, with the uncertainties of the new spent fuel rule, a new commission chairman taking office in January, and the holiday period, no one at the NRC is sure what the time frame will be for a response.

For its part, MCE said it isn’t going to wait around for the agency to make its next move.  Having found that the spent nuclear fuel torque wrench still has pulling power left in it, the group said:

“MCE will appeal the NRC’s decision in Court should our request be denied. The NRC has no reason to rush the license extension of the Callaway 1 nuclear reactor because its current operating license does not expire until 2024, which allows plenty of time for the Court of Appeals to clear up the legal issues with the Continued Storage rule.”

Ameren representative Sarah Kovalski told a local TV station, just prior to MCE’s filing of that group’s contention, that the NRC’s technical and environmental reviews were encouraging and she felt confident about the commission renewing the license.

She added a license extension will be an economic boost for the local area.

“It generates a lot for the economy for this area, the workers that come in, they’ll stay in the community. They’ll live here for a long period of time, so that’s a boost,”

While MCE is contending the license extension, Ameren is building a dry cask spent fuel storage facility which could safety store the material for 50-100 years.

Dan Yurman ~ For breaking nuclear news follow me on Twitter @djysrv or https://www.twitter.com/djysrv ~ About this blog and disclaimers for NeutronBytes Blog ~ https://neutronbytes.com/2014/08/31/welcome-post/ ~ Email me: neutronbytes [at] gmail [dot] com ~ Mobile via Google Voice 216-369-7194 ~ Header Image Credit: http://apod.nasa.gov/apod/ap110904.html ~ ** Emails sent by readers about blog posts are considered to be comments for publication unless otherwise noted. ** The content of this blog is protected by copyright laws of the U.S. "Fair use" provisions apply. The RSS feed is for personal use only unless otherwise explicitly granted.
View all posts by djysrv →
This entry was posted in Nuclear, Yucca Mountain. Bookmark the permalink.
%d bloggers like this: