It certainly is interesting that as Iran’s negotiations with the West come down to the wire, the Russians show up with a mega deal for commercial nuclear power 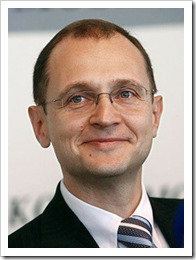 One thing you can say about Sergi Kiriyenko, the head of Rosatom (right), and that is he never lets a customer’s market imponderables stand in the way of a deal.  Earlier this year Rosatom announced, amid some considerable controversy, that it had inked a $50 billion deal with South Africa to build 9.6 GWe of new commercial reactors.

The deal consists of eight 1200 MW VVER light water reactors.  According to South African media reports, the Russians claim they can deliver the reactors at a price of $5000/Kw.

The South African Energy ministry, which has its own plan for about half the size of the Russian new build, thinks the price point is $6500/Kw, a big difference even in the mega millions world of commercial nuclear reactors.

So it is is somewhat less of a nasty surprise, and more of a head scratcher for diplomats trying to get the Iranian government to give up its nuclear ambitions, to see the Russians announce on Nov 11 that they will build two new reactors at Iran’s Bushehr site on the Persian Gulf with plans for six more – two more at Bushehr and four more at sites to be determined at later dates.

According the multiple media reports, Rosatom plans to build the same type of commercial reactors for Iran that it has proposed for export projects elsewhere which is the 1000 MW VVER, a light water reactor that uses commercial grade nuclear fuel at 3-5% U235 level of enrichment.

You cannot make bombs with this level of U235 in the fuel. Plus, Rosatom said that all eight plants would be subject to IAEA inspections and that Russia would supply all of the fuel and take back the spent fuel from all of the power stations. The Russians would build, operate, and manage all aspects of the first four reactors.  Some technology transfer might be negotiated with Iran for the second round of reactors.

As a side note the Russians said that final production of fuel assemblies might take place in a plant to be built in Iran, but that all enriched uranium, and fabricated fuel pellets, would come from Russia. Most likely, the fuel would come from Angarsk, near Irkutsk in Siberia. The World Nuclear Organization has a complete profile of Russia’s nuclear fuel cycle.

It has been proposed that one way Iran could keep its uranium centrifuges is if Russia took the output and turned it into commercial nuclear fuel. This scenario would address nonproliferation concerns, but is it workable? Independence verification would be needed through the IAEA.  Iran has been anything but transparent so far in working with the IAEA which is not a confidence builder for this plan.

A very real question is how is Iran going to pay for the reactors?  The country’s economy is on the rocks because of economic sanctions and rapidly dropping oil prices.  One possibility is that the Russians are betting the Iranians will offer to pay for the reactors with oil which they will be able to sell on world markets if, and only if, they negotiate a deal with the West on their uranium enrichment program.

Running the numbers for eight 1000 MW reactors at $5000/kw yields a snapshot value of $5 billion per reactor or $40 billion overall.  That kind of money might be helpful to Russia which depends heavily on oil exports to keep its economy afloat.  Also, it would pull $40 billion worth of oil out of world markets and put it in Putin’s hands perhaps to hold for a future date when market prices have moved north of $100/barrel..  At the current price of $75 for barrel oil, $40 billion works out to 533 million barrels of oil.

Of course, a program to build eight nuclear reactors will likely be spread out over a period of at least 10-20 years so future oil prices might either make this a better deal for Iran or for Russia. It isn’t clear how the returns would work out for such a volatile commodity over such a long period of time.

It still seems plausible then that one motivation for Russia’s deal is to prevent Iran’s return to world oil markets from depressing the price further. But some experts disagree with this idea.

According to the Financial Times, Mark Fitzpatrick, a former US State Department diplomat, says that the whole enterprise is a smoke screen for Iran to justify its uranium enrichment infrastructure.  He called it a potential “Putin double cross” of the negotiations being led by the European Union and the U.S.

However, the Russians have been consistent in their export deals that they do not result in the construction or maintenance of local uranium enrichment facilities. The Russians have insisted on supplying all the fuel and taking back the spent fuel.

This is the model being used by Rosatom to build  multiple VVER units in Turkey. And the Russians have no interest in seeing Iran arm itself with nuclear tipped medium range missiles (1200 miles) which put key Russian cities within reach of such weapon systems.

Meanwhile, American diplomats are probably steaming, and justifiably so, that Russia has entered the deal as the P5+1 negotiations with Iran come down to the self-imposed November 24th deadline for an agreement.

It’s all about perceptions even if from a practical matter the Russian deal has no direct influence over with any outcome between Iran and the West concerning its enrichment program. That said, on the face of it, the commercial reactors don’t pose a proliferation threat, but, then again, it is doubtful the timing of the deal is a coincidence.

Dan Yurman ~ For breaking nuclear news follow me on Twitter @djysrv or https://www.twitter.com/djysrv ~ About this blog and disclaimers for NeutronBytes Blog ~ https://neutronbytes.com/2014/08/31/welcome-post/ ~ Email me: neutronbytes [at] gmail [dot] com ~ Mobile via Google Voice 216-369-7194 ~ Header Image Credit: http://apod.nasa.gov/apod/ap110904.html ~ ** Emails sent by readers about blog posts are considered to be comments for publication unless otherwise noted. ** The content of this blog is protected by copyright laws of the U.S. "Fair use" provisions apply. The RSS feed is for personal use only unless otherwise explicitly granted.
View all posts by djysrv →
This entry was posted in Iran, Nuclear, Rosatom. Bookmark the permalink.